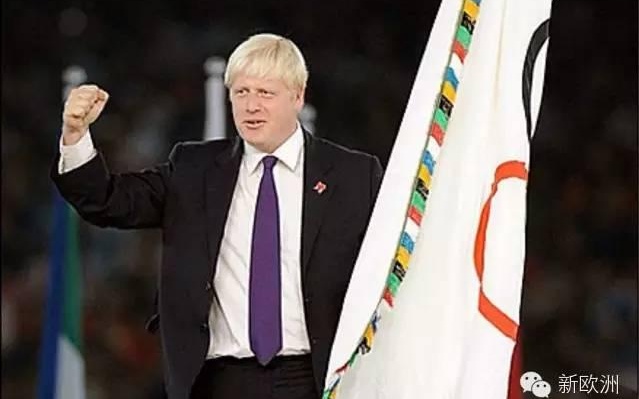 UK Prime Minister Boris Johnson, then Mayor of London, poses with the Olympic flag at the closing ceremony of the Beijing Summer Games in 2008

On March 16, the UK Government published its purported integration of security, defense, development, and foreign policy, “Global Britain in a Competitive Age”.

There is always merit in a measured consideration of interests and capabilities, and the dynamics of our present situation — from the digital age to pandemic to shifts in the global economic landscape — are an added incentive.

But this review is not driven primarily by that need. Instead, this is a public relations exercise for a post-Brexit Little Britain, both to puff itself up and to hide the reality of how small it may have become.

Prime Minister Boris Johnson’s Foreword is just a repeat of his Golden Future audition: “Having left the European Union, the UK has started a new chapter in our history. We will be open to the world, free to tread our own path, blessed with a global network of friends and partners, and with the opportunity to forge new and deeper relationships.”

So we can bundle him off-stage to get to the important theater. Far from thinking through an integrated policy making the best of proximity to Europe as well as the purported “new and deeper relationships”, this is a cutting off of the Continent to spite the UK’s future.

There are elements of the review which are more than Wizard of Oz drapery. Sections on cyber and artificial intelligence have their place in digital security/insecurity and economy of 2021.

But this reality is peripheral to the fantasy of “Global Britain” ruling the waves. The Europeans have not only been vanquished but erased by “the UK [as] a European country with global interests”. The European Union has only a cameo appearance. France, Germany, and Ireland each get a paragraph. A few others are tossed into a sentence “where we can find common cause”.

In contrast, the UK will turn again to the Asia where Victoria was Empress, Japan was opening up to the West, and China knew its place. Now, in the very first “overarching trend” cited by the review, the UK will deal with “China’s increasing power and assertiveness internationally [and] the growing importance of the Indo-Pacific to global prosperity and security”. In the section on “geopolitical and geoeconomic shifts”, there is not a word about Europe. This is a UK vision where “drivers of growth in the global economy are likely to continue moving to the south and east, in particular towards the Indo-Pacific region”.

The beckoning pot of gold grows larger and larger. The Indo-Pacific is the “world’s growth engine”. It has 40% of global GDP, leadership in digital and technological innovation; investment in renewable energy and green technology; and vast opportunities for Foreign Direct Investment.

So how will Brexit Britain secure its Golden Future via Asia? That’s where the fantasy gets a bit fuzzy. China is one of the UK’s havens for trade and investment, but it is the also the greatest State-based threat to British security. Ties are to be “cemented” with South Korea and there are “regional powers such as Indonesia, Vietnam, Malaysia, and Singapore”. India gets pride of place with two full paragraphs and the “Enhanced Trade Partnership” — there’s no detail on that partnership, but there is the mention of “more than 800 [British] staff spread across eleven posts”.

Never mind. The review assures, “We will be the European partner with the broadest and most integrated presence in the Indo-Pacific — committed for the long term, with closer and deeper partnerships, bilaterally and multilaterally.”

It only took 24 hours for the curtains to be pulled back to expose “Global Britain”.

The review had proclaimed that the UK is “at the heart of a network of like-minded countries and flexible groupings, committed to protecting human rights and upholding global norms”.

But Foreign Secretary Dominic Raab, in audio apparently linked by a civil servant, told thousands of Whitehall personnel in a conference call: “If we restrict [trade] to countries with European convention on human rights-level standards of human rights, we’re not going to do many trade deals with the growth markets of the future.”

That might explain why the review — while giving two mentions of “extensive human rights violations in [China’s] Xinjiang” and “a repressive national security law on Hong Kong” — did not mention concerns about Saudi Arabia, other Gulf States, Turkey, or India.

Philip Barton, the Permanent Secretary at the Foreign, Commonwealth and Development Office, wrote staff about the leak. Significantly, he did not pull back Raab’s statement. Instead, he chastised the leaker of the audio for “significant breaches of the trust placed in us”.

But Biden Trumps the Review

And then the Government’s stage collapsed.

Unsurprisingly, the review declared that no partnership was “more valuable to British citizens than our relationship with the United States”.

But the Americans had another message for the Johnson Government. It came via Maroš Šefčovič, the European Commission’s Vice President. Chiding London for breaching the Northern Ireland Protocol in the Brexit Agreement, he relayed the concern that the Good Friday Agreement was being undermined: “This is what I feel when I talk to my international partners; that was what I felt when I talked to the Friends of Ireland on the [Capitol] Hill in the US.”

Once again, the Government’s lofty proclamations ran aground on the reality that neither the Biden Administration nor the US Congress will be completing, let alone privileging, a trade agreement — especially with a London which is threatening reimposition of a hard border in Ireland.

On March 25, Joe Biden amplified the message. He showed up at a virtual European Union heads of state summit, the first US Presidential appearance since 2009.

Biden reworked the rhetoric of the UK review. He mentioned “close cooperation on common challenges”, such as Coronavirus and climate change, but the “most valuable” relationship was not necessarily with London: “A strong EU is in the U.S. interest, noting our shared democratic values and the world’s largest trade and investment partnership.”

Boris Johnson did get a phone call from the US President the next day. But the contact was not of florid exaltation of the Golden Future. Instead, behind Biden’s call for shared investment in infrastructure in developing countries was another reality of Global Britain: far from promoting that investment, the Johnson Government is cutting foreign aid by 70%.

In 2008, at the end of the Beijing Summer Games, London Mayor Boris Johnson waved the Olympic flag — a bit manically — and blustered about British superiority:

Ping-pong was invented on the dining tables of England in the 19th century, and it was called Wiff-waff.

Others might beg to differ that it is all just Wiff-Waff.