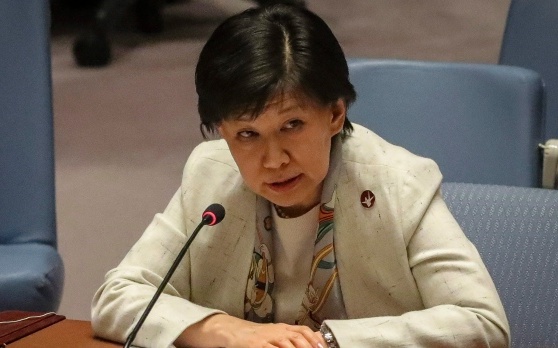 The UN’s head of disarmament, Izumi Nakamitsu (pictured), has reported the discovery of an undeclared chemical warfare agent at an Assad regime site in Syria.

Nakamitsu told a Security Council meeting Thursday of the finding. She did not name the agent, which was detected in samples obtained by the Organization for the Prohibition of Chemical Weapons.

But the official explained that that the presence “inside storage containers of large volume at a previously declared chemical weapons facility may imply undeclared production activities”.

The statement extended Nakamitsu’s presentation in February to the Council, describing the OPCW finding that the regime had lied about a facility producing nerve agents.

After its sarin attacks near Damascus in August 2013, killing more than 1,400 people, Russia pressed the Assad regime to join the Chemical Weapons Convention to prevent Western military intervention. The regime has declared that it completed the handover of chemical stocks and destruction of facilities, but UN inspectors continue to find undeclared agents and sites.

Nakamitsu told the Council that the OPCW recently found that “production and/or weaponization of chemical warfare nerve agents did, in fact, take place” at one facility, countering the Assad regime’s denial of any production. The addition of the site to those which are undeclared “is concerning”.

On April 21, the OPCW’s member states suspended the Assad regime’s rights until issues are resolved.

Despite joining the Chemical Weapons Convention, the Assad regime regularly carried out chemical attacks from 2014 to 2018. The UN and OPCW have cited about 35 incidents. A few involve the nerve agent sarin, including the killing of about 90 people in Khan Sheikhoun in northwest Syria in April 2017. Most attacks are with chlorine, which is not banned under the Chemical Weapons Convention.

The last suspected attack was in Douma, near Damascus, in April 2018 when chlorine killed 43 people sheltering in a building. A week later, the US, France, and the UK carried out airstrikes on three complexes connected with the regime’s chemical weapons program.

The OPCW Fact Finding Mission found in March 2019 that chlorine was used. Russia, the Assad regime, and supportive activists have pursued a disinformation campaign to undermine the organization.

The OPCW’s inspectors have withstood the propaganda to continue investigations. They have formally cited the regime for chlorine and sarin attacks in northern Hama Province as well as on Khan Sheikhoun. In April, just before the decision to strip the Assad regime of rights, the OPCW found that the regime had used chlorine on Saraqeb in northwest Syria in February 2018.

The OPCW’s Investigations and Identification Team is completing a report on responsibility for the Douma attack. Fearing another ascription of blame to the Assad regime, Russia, the regime, and supporters have escalated their disinformation.

“A Clear and Collective Message”

US Deputy Ambassador Richard Mills welcomed Thursday’s statement by Nakamitsu as “a clear and collective message that the use of chemical weapons has consequences”.

The United States assesses that the regime’s innumerable atrocities — some of which rise to the level of war crimes, crimes against humanity — include at least 50 chemical attacks since the conflict began.

We continue to assess that the Assad regime retains sufficient chemicals to use sarin, to produce and deploy chlorine munitions, and to develop new chemical weapons.

Russia’s Ambassador Dmitry Polyansky continued the cover for the regime’s attacks. He repeated its propaganda that the OPCW is acting under pressure from Western nations “to provoke Damascus to take drastic steps and thus achieve their own political objectives”.

Mills responded, “This Council and UN member states are not fooled by this Russian disinformation tactic.”