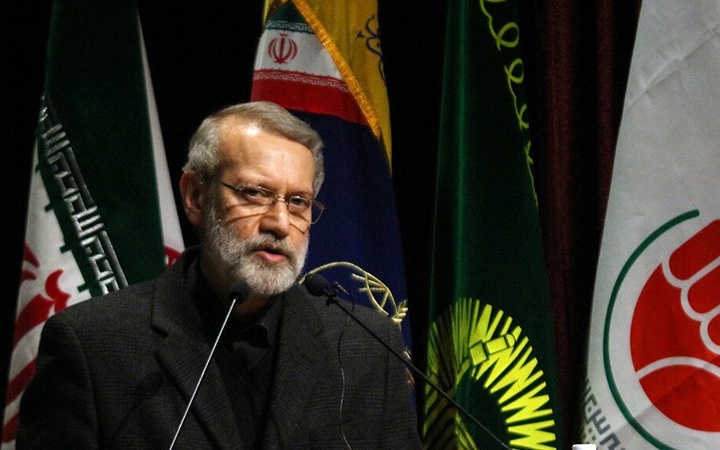 President Hassan Rouhani has submitted a written complaint to the Supreme Leader about the Guardian Council’s ban on all but seven candidates for the June 18 Presidential election.

Rouhani told a Cabinet meeting that he had no alternative after the Guardian Council prevented him from implementing Constitutional provisions.

Therefore, unavoidably, I dispatched a letter to the Supreme Leader of the Revolution, and offered what I had in mind about whether he could help with this.

President Hassan Rouhani has criticized the Guardian Council’s banning of all but seven candidates for the June 18 Presidential election.

“Minimal participation is not in anyone’s interest. The first losers as a result are the people and no political group will benefit,” Rouhani said.

Iranian semi-official media ignores Rouhani’s statement. Instead, the conservative outlet Tasnim has him saying, “A magnificent election in the country guarantees the legitimacy of the establishment.”

The Revolutionary Guards’ Fars revises the President’s words: “This important and great election is a symbol of freedom and awareness of the people.” It then omits any mention of the Guardian Council in his complaint: “If, God forbid, there is a low turnout in an election and issues are not clear to the people, what will be the national cohesion, national interest and security, and the prestige of the system?”

Judiciary head Ebrahim Raisi, the hardline favorite, claimed he is trying to persuade the Council to review its decision.

But former Parliament Speaker Ali Larijani, a frontrunner who was banned, accepted the outcome, “I have accepted the result and I have no objection and I do not request a re-examination.” He urged Iranians to participate in the elections.

The Guardian Council reported used the pretext that Larijani’s daughter Fatemeh is studying medicine at Cleveland State University in Ohio.

The Interior Ministry has confirmed the list of seven — and only seven — candidates for the June 18 Presidential election.

The line-up is exactly as reported by the Revolutionary Guards’ Fars News Agency (see below). That means two likely frontrunners, 1st Vice President Esh’aq Jahangiri and former Parliament Speaker Ali Larijani, have been banned to clear the way for hardline favorite Ebrahim Raisi.

As in 2013, when the Guardian Council barred ex-President Hashemi Rafsanjani, the 12 members have approved a “consolation” candidate for centrists and reformists. However, former Vice President Mohsen Mehr Alizadeh is unlikely to spring the surprise that Hassan Rouhani did in his first-round victory eight years ago.

Mahmoud Ahmadinejad — President from 2005 to 2013 and the “winner” of the disputed 2009 election as the Supreme Leader intervened — was also barred by the Council.

Larijani’s ban is likely to set off shock waves. He was once a leader in the Principlist camp, but had positioned himself this year as the best alternative to Raisi, criticizing the judiciary head in announcing his candidacy.

Approved candidates Mohsen Rezaei and Saeed Jalili both ran in the 2013 election, but fragmented the conservative vote as Rouhani claimed victory. It remains to be see if either or both will step aside for Raisi.

Two other conservative politicians and Central Bank head Abdolnasser Hemmati round out the list. None of the three is expected to be a significant factor in the race.

Iran’s Guardian Council has approved only seven candidates for the June 18 Presidential election.

Spokesman Abbas Ali Kadkhodaei said the list was sent to the Interior Ministry late Monday. He did not give the names of the approved candidates.

Rumors have circulated that the Council had again blocked some leading politicians from candidacy, including 1st Vice President Es’haq Jahangiri and former Parliament Speaker Ali Larijani.

The claims were fed by Fars, the outlet of the Revolutionary Guards. The elite military organization is opposed to both Jahangiri, who is backed by reformist factions, and Larijani, who has criticized the hardline favorite Ebrahim Raisi.

More than 590 people applied for candidacy.

A series of high-profile politicians and officials filed for candidacy in Iran’s Presidential elections on Saturday, the final day of registration for the contest.

The Guardian Council, a 12-member body named by the judiciary and the Supreme Leader and approved by Parliament, will now decide who is allowed to stand.

The Council is expected to permit Raisi and Larijani to run. However, former President Mahmoud Ahmadinejad will almost certainly be blocked, as he was in 2017.

It is uncertain if the Council will allow a high-profile reformist candidate. In 2013, its tactics backfired when, after former President Rafsanjani was banned, his protégé Hassan Rouhani was permitted as a a consolation.

The centrist Rouhani then won a surprise first-round victory as conservatives failed to unify around one of three candidates. Rouhani won again in 2017 against the challenge of Raisi.

The hardline favorite in Iran’s Presidential election, Ebrahim Raisi, announced on Friday morning that he will formally register his candidacy in the June contest.

Former Parliament Speaker Ali Larijani has registered. He set out his challenge to Raisi and other conservative candidates, saying the “economy is neither a garrison nor a court to be run by orders or threats”.

Former speaker of #Iran parliament Ali Larijani registers to run for president on last day of registering presidential candidates at Interior Ministry. He is eying to secure endorsement of moderates, reformists and parts of conservatives in #IranElection2021. pic.twitter.com/QBeFrnuiRu

Judiciary head Ebrahim Raisi, the hardline favorite in Iran’s Presidential election in June, has registered his candidacy, according to a leading Iranian site.

However, journalist Fereshteh Sadeghi noted that the Raisi camp has not confirmed the report.

Hasn’t registered yet, it is not even definite that he would run

Raisi lost the 2017 contest to President Hassan Rouhani. However, conservatives have eroded Rouhani’s position since then, taking a majority in Parliamentary elections last year.

Raisi has led in opinion polling and is considered the preferred candidate of the Supreme Leader.

Hardline factions are hoping to avoid a repeat of 2013, when Rouhani won his first term after three candidates split the conservative vote. Claims are circulating that other hardline and conservative candidates — including Mohsen Rezaei, Secretary of the Expediency Council and a former Revolutionary Guards commander, and military figures Gen. Rostam Qassemi and Saeed Mohammad — will withdraw in favor of Raisi.

Parliament Speaker Mohammad Baqer Qalibaf, one of the candidates in 2013, told legislators on Tuesday that he will not be running.

#Iran former president Ahmadinejad has registered to run for president. Showing his ID card he says “the owner of this [ID] is purely ‘made in Iran’”. pic.twitter.com/mxQDG7ocOa

Ahmadinejad, who held the Presidency from 2005 to 2013, has fallen out with other hardliners and conservatives and is positioning himself as an insurgent candidate.

There are five days of registration. The Guardian Council, with members named by the judiciary and the Supreme Leader, will then decide which candidates are allowed to run.

Rouhani cannot serve a third term, and Foreign Minister Mohammad Javad Zarif — a target of conservatives — has said he will not stand.

Reformists have struggled to put forward a high-profile candidate. Many parties have been curbed and activists detained since the disputed 2009 Presidential election. Iranian media are not allowed to quote or post photos of Mohammad Khatami, President from 1997 to 2005.

Raisi made his name in the 1980s as a prosecutor, including a role in the executions of thousands of political prisoners in 1988.

He was the Deputy Chief Justice from 2004 to 2014 and Attorney General from 2014 to 2016. He then headed Astan Quds Razavi, the wealthy organization managing the shrine of Imam Reza in Iran’s second city Mashhad.