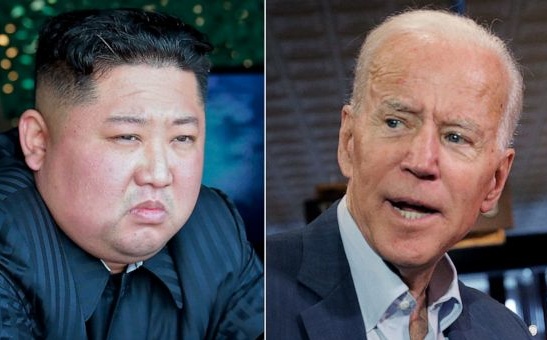 The Biden Administration sets out an approach of “diplomacy and stern deterrence” over North Korea and its nuclear weapon program.

In a Wednesday night speech to Congress, President Joe Biden’s reference was brief, covering both Iran and Pyongyang: “Nuclear programs present serious threats to American security and the security of the world. We’re going to be working closely with our allies to address the threats.”

Our policy will not focus on achieving a grand bargain nor will it rely on strategic patience. Our policy calls for a calibrated practical approach that is open to and will explore diplomacy with the DPRK and to make practical progress that increases the security of the United States, our allies, and deployed forces.

Trump’s shift, from “fire and fury” threats to an objective of being seen with Kim, led to the first face-to-face meeting between US and North Korean leaders in 2018. Trump became the first current US President to step foot in North Korea, striding a few feet from the demilitarized zone, the next year.

But there was no advance in discussions over North Korea’s nuclear weapons, as Pyongyang quickly set out that “denuclearization” would have to cover the entire Korean Peninsula. Trump peremptorily announced a withdrawal of US troops from South Korea, but was checked by the Pentagon and other US agencies.

See also He Came to North Korea. He Shook Hands. Then Trump Retreated.

North Korea’s Foreign Ministry replied on Sunday that the Biden Administration’s statements were a “spurious signboard” for the US to “cover up its hostile acts”.

The Ministry said Biden had insulted Kim Jong-Un with a “big blunder” in his “outdated” stance: “We have warned the US sufficiently enough to understand that it will get hurt if it provokes us.”

Pyongyang launched two suspected ballistic missiles into the sea near Japan in March.

South Korean President Moon Jae-In is scheduled to visit the White House on May 21. He said last week, “The most important starting point for both governments is to have the will for dialogue and to sit down face to face at an early date.”