UPDATED: US — Iran Nuclear Talks “In An Unclear Place” 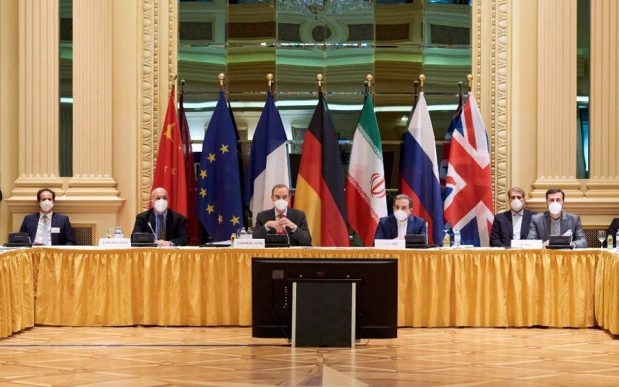 Representatives from Iran and the powers in the 2015 nuclear deal open indirect talks with the US in Vienna, April 6, 2021 (EPA)

Iran’s chief nuclear negotiator, Deputy Foreign Minister Abbas Araqchi, indicated on Saturday that the US is moving toward lifting of sanctions on sectors such as oil and banking.

#Iran DFM: There's agreement on lifting thematic/sectoral sanctions i.e. energy, finance, banking, ports, etc… Besides there's a long list of individuals & entities under sanctions. Majority of them have been agreed to be removed from the list. Talks on remaining cases continue pic.twitter.com/mhXo4i2GMM

The Trump Administration imposed the comprehensive sanctions on the energy and financial sectors in November 2018, six months after withdrawing from the 2015 nuclear deal.

But the US State Department maintained its cautious line, referring back to National Security Advisor Jake Sullivan’s remarks on Friday.

Russia’s representative at the Vienna talks, Mikhail Ulyanov, said a breakthrough should not be expected. However, he added, “We need simply to continue diplomatic, day-to-day work, and we have all the reasons to expect that the outcome, [the] final outcome, will be successful and it will come quite soon, in a few weeks.”

ORIGINAL ENTRY, MAY 1: US National Security Advisor Jake Sullivan has expressed caution over the indirect talks about the 2015 Iran nuclear deal, saying they are in “an unclear place”.

The US and Iran were in a third round of talks in Vienna this week, brokered by the European Union and the powers in the agreement (UK, France, Germany, China, and Russia). Three working groups have been established: on technical aspects, on lifting of American sanctions, and on sequencing of a US re-entry to the agreement and Iran’s return to compliance.

Sullivan said at the Aspen Security Forum on Friday:

I’m not going to characterize the substance of the negotiations at this point because they are in…an unclear place.

We’ve seen willingness of all sides, including the Iranians, to talk seriously about sanctions relief restrictions and a pathway back into the JCPOA [Joint Comprehensive Plan of Action]. But it is still uncertain as to whether this will culminate in a deal in Vienna.

Asked if Tehran is negotiating in good faith, Sullivan replied, “The Iranians have come in a serious way to have serious discussions about details and the teams are working through those details now.”

The Joint Commission convenes on Saturday in Vienna to review the status of the working groups’ discussions. Delegations will then return to capitals for consultations.

President Hassan Rouhani’s Chief of Staff, Mahmoud Vaezi, said on Thursday, “Very fundamental steps have been taken in the Vienna talks and agreement has been reached on important parts so far….Given the complexity of the negotiations, what has been done so far is promising.”