He Came to North Korea. He Shook Hands. Then Trump Retreated. 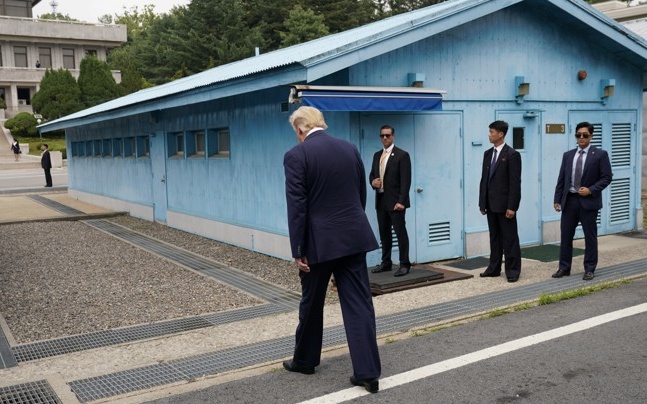 Co-published with The Independent:

They came. They shook hands. Then one of them retreated.

Donald Trump got his latest photo opportunity with his “good friend”, North Korean leader Kim Jong-un. He can say that he is the first US President to take a step — 20 of them — inside North Korea.

But beyond the headline pictures of two smiling leaders, at least one of them authoritarian, sharper analysts were asking if there was any substance to a meeting which follows two summits that failed to make any progress on long-standing political, military, and economic issues.

This morning, we have our answer: as Trump sent his Twitter invitation to Kim on Saturday, his officials — unaware that the impulsive tweet was being sent — are planning a retreating from the Administration’s position of full “denuclearization” of North Korea.

The historic June 2018 summit in Singapore yielded only a vague statement on a nuclear-free Korean Peninsula, and February’s meetings in Vietnam ended with a dramatic walkout by Kim. So weeks before Trump’s trip to the G20 summit in Osaka and his planned stopover in the demilitarized zone, the advisors have been working on the basis of a “nuclear freeze” by North Korea.

Pyongyang will retain all of its nuclear weapons — with estimates ranging from 20 to 60 — and there will be no restrictions on its missile capability.

In effect, Trump’s advisors are taking up a February offer of Kim that was rejected by Trump, leading to the North Korean leader’s sudden departure from the summit.

Kim offered to give up the nuclear fuel production site at Yongbyon, in return for the lifting of the strictest US sanctions. Trump, advised by Secretary of State Mike Pompeo and his National Security Advisor John Bolton, rejected the proposal because North Korea has other production sites besides Yongbyon.

US officials are now hoping that they can persuade North Korea to expand the Yongbyon offer to include other facilities, such as the nearby covert site at Kangson.

Uninformed at the Top, Uncertain Below

But a “senior US official involved in North Korean policy” said there is no way to know if North Korea will agree to a freeze. He noted that Pyongyang’s negotiators have insisted that only Kim can define the dismantling of Yongbyon to include a change in status of other facilities.

Trump’s photo opportunity complicates the planning. As he praised Kim, Trump could not even answer with whom the US will be talking, amid rumors that the North Korean leader detained and even executed his top negotiators after the February debacle in Vietnam, before declaring, “I know who the head is.”

Trump did not refer to denuclearization, a nuclear freeze, or any other substantial matter in the appearance with his good friend. All to grasp was his vague declaration before the journey to the demilitarized zone:

There’s a good feeling, so it could be very good. As far as another meeting, let’s see what happens today before we start thinking about that.

So as Trump hangs the photos on his wall, we are left in limbo. Up to last weekend, the Administration’s public line, stated by Secretary of State Pompeo, was that “rapid denuclearization of North Korea [must] be completed by January 2021″.

In 2017, during a visit to South Korea, US Secretary of State Rex Tillerson rejected the nuclear freeze option because it would “leave North Korea with significant capabilities that would represent a true threat, not just to the region, but to American forces, as well”.

Is the Administration really turning back the clock to 1994 when President Bill Clinton and Kim Jong-il, the father of Kim Jong-un, negotiated a nuclear freeze? Or to 2007, after the breakdown of the agreement and North Korea’s first nuclear test, when Bush Administration got a partial freeze — only for it too to collapse?

We don’t know. Donald Trump’s Twitter assessment is only that it was “a wonderful meeting with Chairman Kim Jong Un” and a “great honor” that he “stood on the soil of North Korea”.

But after Kim gave Trump his first summit and then resisted any denuclearization, refusing to meet Secretary of State Pompeo, I assessed, “Trump is playing ego checkers while North Korea plays three-dimension chess”.

Those contrasting games continue — in return for giving Trump his pictures, North Korea may get a lifting of some US sanctions without giving up its nuclear program.

But I’ll go a step farther. With his latest vanity meeting, Donald Trump has thrown the board in the air. And it’s his officials who will have to try and find all the pieces.