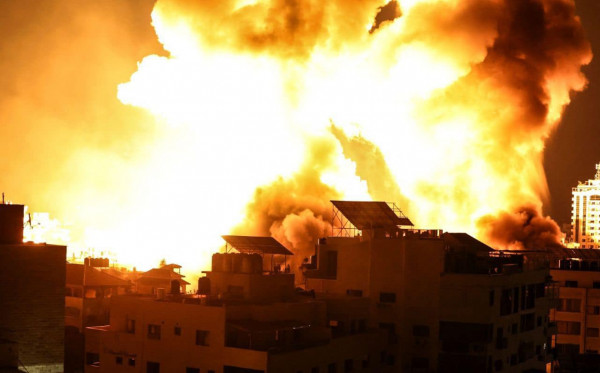 A fireball rises from a Gaza building struck by Israeli missiles, May 18, 2021 (Mohammed Salem/Reuters)

President Joe Biden has repeated his endorsement of Israel’s deadly attacks on Gaza, while backing an eventual ceasefire.

Biden made the statement in a Monday phone call with Israeli Prime Minister Benjamin Netanyahu. A brief White House readout said Biden “reiterated his firm support for Israel’s right to defend itself against indiscriminate rocket attacks”. He continued to refer to the Hamas leadership of Gaza as “terrorist” during the discussion of “progress in Israel’s military operations”.

As the killings in Gaza reached 212, including 61 children and 35 women, the President “encouraged Israel to make every effort to ensure the protection of innocent civilians”. He “expressed his support for a ceasefire and discussed US engagement with Egypt and other partners towards that end”.

Following a meeting with security officials, Netanyahu said there would be no easing of the Israeli assault: “The directive is to continue striking at the terrorist targets. We will continue to take whatever action necessary in order to restore quiet and security for all the residents of Israel.”

Asked about a cease-fire, a “senior Israeli official” told Reuters, “There is no such thing right now. There is no negotiation. There is no proposal. There is nothing on the table.”

Biden did not answer a reporter’s question on Tuesday, following a statement about the Coronavirus vaccine program and the despatch of up to 80 million US doses to other countries.

See also EA on Monocle 24: Biden Administration Protects Israel’s Attacks on Gaza
EA on BBC: Is There An International Path Out of Gaza-Israel Killings?

US “Cannot Wait for Situation to Improve”

Hamas rocket attacks inside Israel and the Israeli strikes on Gaza began at the start of last week. They followed escalation of tension over Israeli evictions of Palestinian families in east Jerusalem, and the arrest of hundreds of Palestinian in protests and clashes with Israeli security forces, including on Temple Mount.

On Friday, the Biden Administration sent State Department Hady Amr to Israel for discussions with Israeli, Arab, and Palestinian officials, but not with Hamas representatives.

Amr’s despatch was only after Biden had said Israel’s strikes were not a “significant overreaction” to the rocket fire and the US had blocked a UN Security Council statement, supported by all other 14 Council members, for a ceasefire.

On Sunday, the US blocked the Security Council statement for a third time.

In addition to the 212 dead, about 1,500 Gazans have been wounded. More than 600 homes or businesses have been destroyed and more than 6,400 damaged, with more than 38,000 people displaced. UN officials say at least 800,000 residents lack regular access to safe drinking water.

Sunday was the deadliest day so far, with 42 people, including 10 children, slain.

Israel has reported 10 people, including two children, killed by rocket fire or dead while fleeing barrages.

As dawn broke on Tuesday, Israel continued its levelling of Gazan buildings, including high-rise towers. Balls of fire rose from several sites amid the sound of explosions.

A bipartisan initiative seeking a ceasefire has been launched by US Senators Christopher Murphy and Todd Young. A supporting statement was issued by 28 Democratic Senators this weekend.

On Monday, half of the Jewish Democratic members in the House wrote to Biden that “the United States cannot simply hope and wait for the situation to improve”.

Secretary of State Antony Blinken said the Biden Administration is “working intensively behind the scenes to try to bring an end to the conflict.”