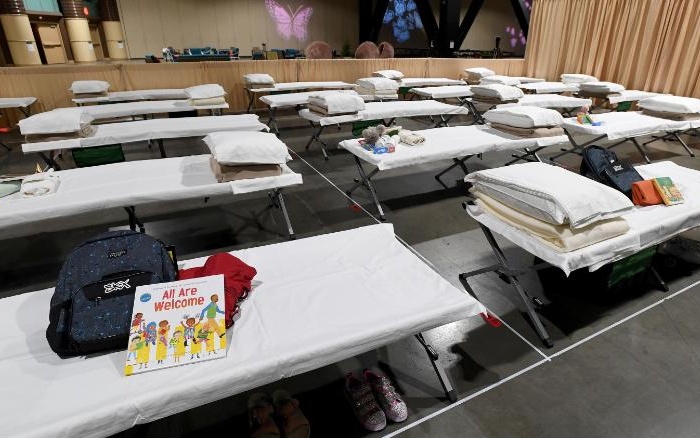 The Biden Administration has sharply reduced the number of undocumented immigrant children in detention — and now faces the challenge of moving them out of overcrowded shelters.

The Administration inherited a system damaged by Donald Trump’s “zero tolerance” approach, with its emphasis on detention and separation of families, and faced a surge from January in migrants on the southern US border.

This included a large number of juveniles, both in families and unaccompanied. More than 17,000 unaccompanied minors were processed in March, far beyond the record of 11,861 in May 2019.

There were 5,767 unaccompanied minors in detention facilities in March, and a rise of migrant family members from 7,000 to nearly 19,000.

Facing criticism over the ongoing detentions, officials put a priority on shifting the children from the custody of Border Patrol to the Health and Human Services shelters. A dozen additional facilities were established.

Now the shelters are nearing capacity in areas such as Texas and California, including convention centers in Dallas, San Diego, and Long Beach, California. The overall system is about 80% full, with more than 21,000 children.

Rebuilding the system after the Trump years, officials are taking a month on average to move juveniles into the care of a family member or sponsor.

Last week the White House authorized Health and Human Services to redirect $850 million to migrant care, and another $850 million could be available in coming weeks.

The Administration estimates that $4 billion is needed before the end of the fiscal year on September 30, and officials project the cost for the entire 2021 fiscal year could be more than $8 billion.

Homeland Security Security Alejandro Mayorkas toured border facilities this week. He said in Donna, Texas, “We have re-engineered the process for the treatment of unaccompanied children — the transfer of them to Health and Human Services shelters where they belong. A Border Patrol station is no place for a child.”

Officials said many sponsors had feared coming forward after the Trump-era program required background information to be shared with Immigration and Customs Enforcement. President Joe Biden has rescinded the requirement.

Health and Human Services said the time in government care has been reduced from 42 days to 30 since Biden took office on January 20.