Biden Administration to Place Some Migrant Families in Hotels 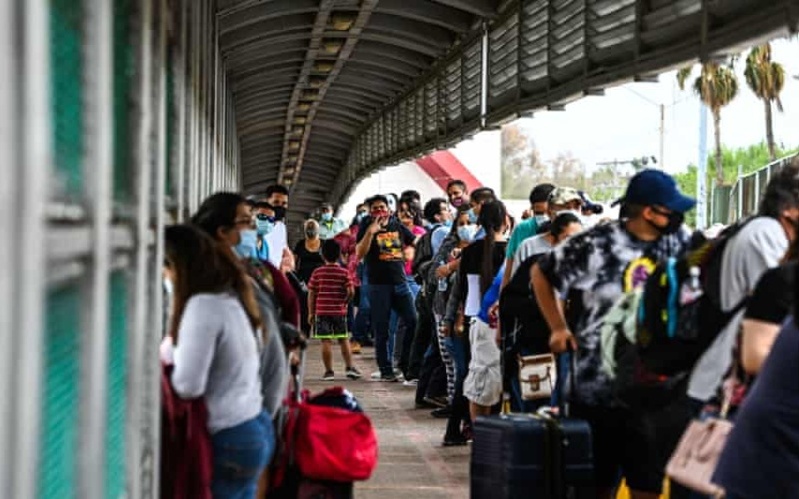 Migrants wait in line to cross the US border at the Gateway International Bridge, Brownsville, Texas, March 15, 2021 (Chandan Khanna/AFP/Getty)

Facing a surge in migration and inheriting the four-year damage and chaos of its predecessor, the Biden Administration plans to shelter some migrant families in hotels.

The program, managed by nonprofit organizations, is a move away from the for-profit detention centers whose use was expanded under the Trump Administration’s “zero tolerance”.

Endeavors, based in San Antonio, Texas, will oversee “family reception sites” at hotels in Texas and Arizona from April. Initially, up to 1,400 vulnerable families be placed in seven different hotels.

About 1,200 undocumented immigrants are being held in two family detention centers in Texas. A third center in Pennsylvania is no longer being used for families.

The Administration is facing a surge in migration since President Biden took office in January. In February, the number of migrant family members rose from 7,000 to nearly 19,000.

Officials said families could be returned to Mexico or their home countries under a Coronavirus order. However, more than half of the 19,000 family members who crossed in February were not sent back.

Two weeks ago, officials said they planned to process and release about 100 families per day from two residential centers in Texas.

See also Biden Administration: Migrant Families to be Released Within 72 Hours of Arrival

With more than 15,000 minors in holding facilities, critics have challenged the used of detention facilities favored by the Trump Administration. Officials, including Homeland Security Secretary Alejandro Mayorkas, said plans were being developed quickly to move the youths to shelters or sponsors.

“The Border is Closed”

But Mayorkas emphasized on Sunday that more migrants should not try to cross the southern US border. He said in a series of TV interviews on Sunday:

The message is clear. Do not come….

The border is closed….We are expelling families. We are expelling single adults….We strongly urge, and the message is clear, not to do so now. I cannot overstate the perils of the journey that they take.

The Secretary emphasized “safe, orderly, humane ways” to address those seeking to cross, and blamed the Trump Administration for dismantling procedures such as the Central American Minors Program, which allows juveniles to make claims in their home countries under US laws.

The Biden Administration has also pledged assistance to Central American countries, eliminated under Donald Trump, tackling causes of migration such as economic deprivation and violence.

“I think we are executing on our plans. And quite frankly, when we are finished doing so, the American public will look back on this and say we secured our border and we upheld our values and our principles as a nation,” Mayorkas said.

In a brief comment to reporters on Sunday night, Biden said, “We’re in the process of doing it now, including making sure that we reestablish what existed before [Trump], which was they can stay in place and make their case from their home country.”

He said he will travel to the border “at some point”.

With Trump still suspended on social media over his incitement of violence, his staff put out a statement calling for the resumption of construction on a Wall with Mexico. They declared that Biden had “turned a national triumph into a national disaster”.

But Sen. Tammy Duckworth of Illinois noted, “This is a result of four years of failed policies, inhumane policies and a systematic dismantling of the asylum system by Donald Trump.”