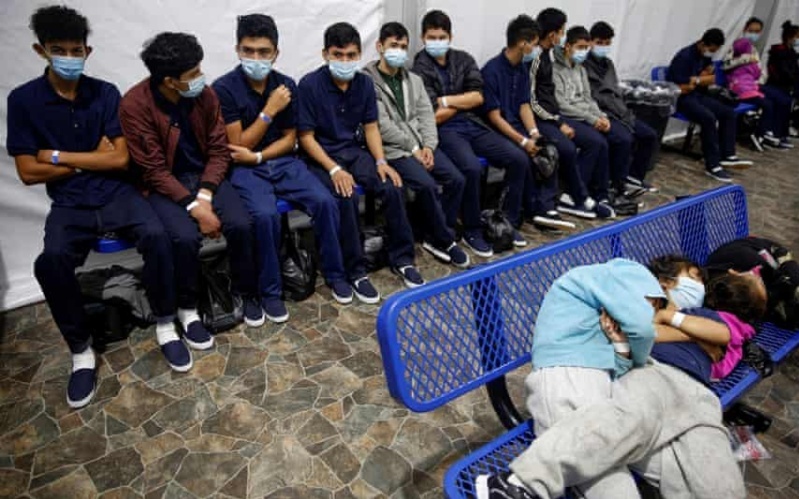 Journalists have toured the main detention facility for migrant children at the US-Mexico border.

The Biden Administration allowed a limited group of reporters into the Donna, Texas center for the first time.

They saw an overcrowded tent complex where more than 4,000 migrants, including children and families, were in pods. The youngest children were in a large playpen, sleeping in mats on the floor.

The center is only designed for 250 occupants. Many of the pods, each about 3,200 square feet, had more than 500 children. 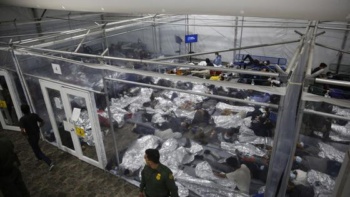 Biden made the announcement on Wednesday, as a delegation of senior White House officials and Congressional legislators visited a holding facility in Carrizo Springs, Texas, where migrant children are held.

Dealing with the legacy of Donald Trump’s “zero tolerance” approach and a surge in migration since January, the Biden Administration is facing more than 15,000 minors in overcrowded facilities which were favored by its predecessor. the number of migrant family members in the facilities has risen from 7,000 to nearly 19,000.

Officials say plans are being developed quickly to move the youths to shelters or sponsors. Last week, the Administration announced a program to host families in hotels, as it pledged to release them within 72 hours of processing at the centers.

Biden said on Thursday that Harris is “the most qualified person” to lead Administration discussions with Mexico and Central American countries “that are going to need help in stemming the movement of so many folks”.

Just after his inauguration on January 20, Biden proposed immigration measures including a 4-year, $4 billion regional support plan to address causes of migration from Central America, including economic deprivation and violence.

US officials also consulting with Mexico on the processes for migrants, after the Trump Administration ordered all asylum seekers to stay there.

Harris echoed Biden’s “Not is not the time to come” to the US:

While we are clear that people should not come to the border now, we also understand that we will enforce the law and that we also — because we can chew gum and walk at the same time — must address the root causes that cause people to make the trek.

Some Republicans sniped at the Vice President. Arizona Gov. Doug Ducey said, “At no point in her career has she given any indication that she considers the border a problem or a serious threat.”

But the Administration’s priority was displayed in the delegation which visited the Texas facility on Thursday. Members included Julissa Reynoso, Chief of Staff to Dr. Jill Biden; Angela Ramirez, President Biden’s legislative liaison with the House; Cindy Huang, director of the Office of Refugee Resettlement; and top immigration advisor Tyler Moran.

Among the legislators was Rep. Henry Cuellar, a Texas Democrat who released photos of an overcrowded temporary facility earlier this week.