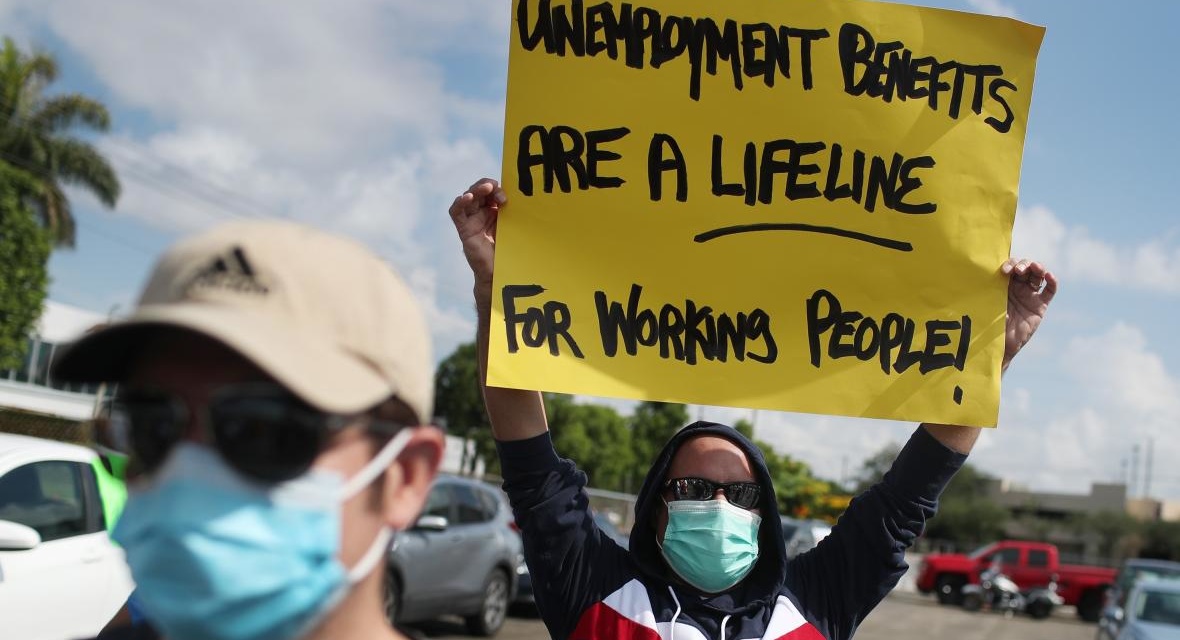 A march in Miami Springs, Florida on behalf of those losing jobs because of Coronavirus (Joe Raedle/Getty)

President Joe Biden has countered Republican state leaders who are slashing federal unemployment benefits despite the economic effects of the Coronavirus pandemic.

Biden criticized the pretext that the unemployment payments are undermining return to work.

At the same time, he ordered the Labor Department to ensure that a person cannot draw the $300/week Federal supplement if he/she turns down a suitable job offer.

He told reporters at the White House that weaker-than-expected job recovery in April was due to child care constraints, school closures, and fears of contracting Coronavirus. He called on companies to help workers obtained vaccinations and to raise their pay.

The President noted the relief from the $1.9 trillion American Rescue Plan, passed in March, would be making its way through the economy. The package includes support for child care, aid for state and local governments, and assistance to small businesses, as well as the supplementary unemployment benefits.

ORIGINAL ENTRY, MAY 9: Republican governors across the US are beginning to slash unemployment benefits, despite the economic damage of the Coronavirus pandemic.

The GOP leaders are aiming at the supplementary $300 weekly benefits authorized by the Federal Government since last year. On Friday, Arkansas joined Montana and South Carolina in the reductions. Indiana and Arizona have signalled they will follow.

Republican legislators in Washington tried to block unemployment assistance in the $1.9 trillion American Rescue Plan of the Biden Administration, but the package passed 50-49 in the Senate — with not a single GOP vote in favor — and 220-211 in the House in March.

On Friday, the Department of Labor announced an addition of 266,000 jobs in April, lower than the projections of economists.

Business groups, including the US Chamber of Commerce, are calling for cancellation of the ARP’s benefits before they are scheduled to end in early September.

But Democrats, economic experts, and activists note that — contrary to the arguments of Republican governors — many people cannot return to work without affordable child care and that families are suffering from deprivation. Some Republican-led states have ended involvement in pandemic relief programs assisting those in the gig economy.

President Joe Biden rejected the GOP arguments that job growth has been slowed because people are tied to unemployment benefits. He told reporters on Friday, “No, nothing measurable.”

Rebecca Dixon, executive director of the National Employment Law Project, summarized, “[Republican leaders] are misguided in their thinking about why people aren’t returning to work. There are all of these ways our care infrastructure is not backup.”

The Biden Administration has proposed the $3 trillion American Jobs Plan for infrastructure and a green economy and the $1.8 trillion American Families Plan, projected to reduce child poverty by half and benefit 65 million Americans. But Congressional Republicans, including Senate GOP leader Mitch McConnell, have vowed to block the packages.