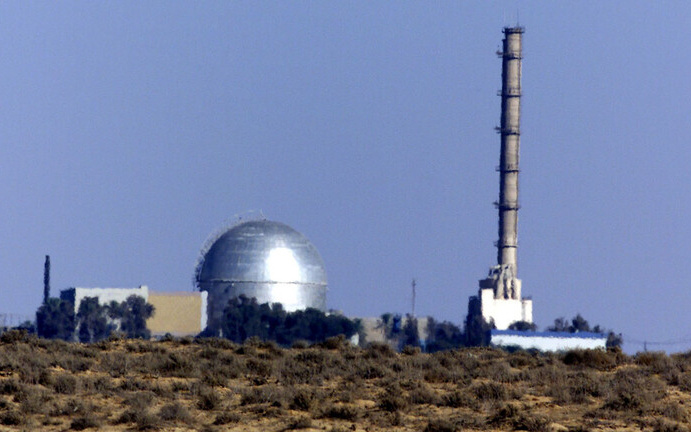 Israel’s nuclear facility at Dimona in the Negev desert

Israel’s Defense Minister Benny Gantz has acknowledged that an Assad regime anti-aircraft missile fell near the Israeli nuclear reactor at Dimona before dawn on Thursday.

The missile exploded in mid-air about 20 miles short of the secretive facility, where Israel developed its first atomic bomb in 1966. Fragments fell to the ground, as air raid sirens rang out.

Gantz explained that the regime’s forces were firing at Israeli jets attacking pro-Assad targets near Damascus, but the errant missile traversed 125 miles of Israeli airspace and was not intercepted by Israel’s air defense.

“In most cases we achieve other results. This is a slightly more complex case. We will investigate it and move on,” Gantz said.

Israel’s military said it bombed the “battery from which the missile was launched and additional Syrian surface-to-air batteries in the area”. A pro-Syrian opposition analyst reports that a regime captain was killed, and several troops wounded.

The Assad regime was careful not to portray a deliberate attack on Israel, which has periodically carried out airstrikes on regime and Iranian bases and facilities since the Syrian conflict began in March 2011.

The Foreign Ministry made no reference to the errant missile, while denouncing Israeli “aggression”.

#IRGC deputy commander Naqdi: Zionists tried very hard to cover up what happened, but the intensity of the explosion was such that everyone realized it. What happened…could not be covered up, so when someone commits evil, he should expect his evil to return to himself.#Israel pic.twitter.com/xtdbQLU2T1

Last weekend the Kayhan newspaper, whose editor is appointed by the Supreme Leader’s office, called for an attack on the Dimona reactor as retaliation for a blast — likely overseen by Israel — damaging Iran’s main nuclear complex at Natanz.

State outlet Press TV, trying to refute Gantz, proclaimed, “Many observers, however, provided different assessments.” Its source is the pro-Assad conspiracy fantasist Mimi al-Laham — “Partisan Girl” on Twitter — who said from Australia, “I think that this is a lie.”

The regime has only successfully responded once to Israel’s attacks. In early 2017, an anti-aircraft missile downed an Israeli jet in northern Israel.

In September 2018, a regime missile accidentally downed a Russian surveillance plane over the eastern Mediterranean, killing all 15 personnel on board.

The head of US forces in the Middle East, Gen. Kenneth McKenzie, told the Senate Armed Services Committee on Thursday that the incident “reflects incompetence in Syrian air defense, where they were responding to Israeli strikes on targets in Syria”.

He added, “I do not believe it was an intentional attack but just rather lack of capability.”