UPDATED: Drone Attack on Iranian Tanker Off Coast of Syria? 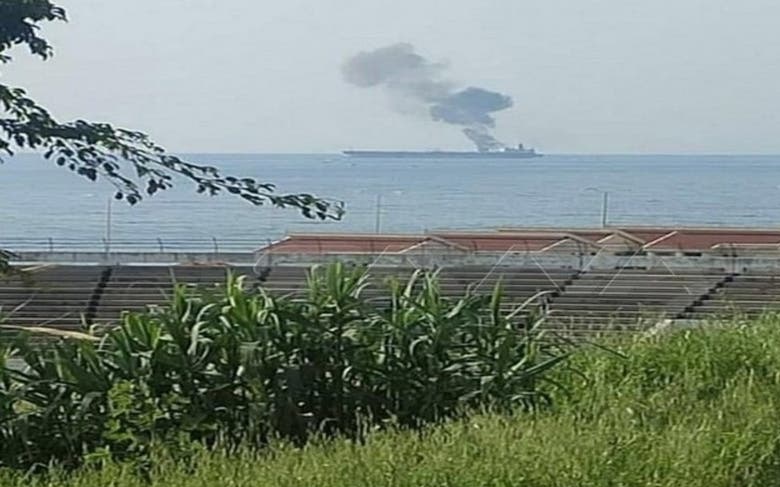 Smoke rises from a fire on a tanker near the port terminal of Baniyas in western Syria, April 24, 2021

Samuel Madani of TankerTrackers reports on the potential extent of the environmental damage from Saturday’s explosion on the oil tanker off the coast of Syria.

Honestly, it's a miracle that WISDOM didn't explode. From these photos, I can confirm that she's carrying at least 300,000 barrels of crude oil, which is more than what EXXON VALDEZ spilled. This could have devastated the east Med. Thanks again @AuroraIntel for finding the pics! pic.twitter.com/fcpMQRiU6I

In yet another version of events from Iranian media, semi-official Tasnim News Agency says the fire on an oil tanker off Syria’s coast was from an accident and not an attack.

The site, citing a “Syrian military official”, claims the fire “broke out due to incautiousness and lack of safety precautions” during a welding operation.

ORIGINAL ENTRY: An oil tanker has caught fire off the coast of Syria, with claims of a drone attack on an Iranian vessel.

Unconfirmed reports said at least three people were killed in the incident near the port terminal of Baniyas in western Syria, with claims on social media that one of the dead was a young worker from the city. The Assad regime’s media said a fire on the ship was extinguished after a drone attack, but gave no word on casualties.

TankerTrackers said in a tweet that the tanker is Beirut-registered; however, it was assisting an Iranian supertanker in offloading of oil.

The tanker seen burning today off the coast of Baniyas is not an Iranian vessel, but a Beirut-registered tanker called WISDOM. She has assisted the Iranian VLCC supertanker ARMAN 114 (ex. ADRIAN DARYA-1) by offloading 300-350K barrels at a time due to depth restrictions. #OOTT pic.twitter.com/tv6lH38IHq

The trackers said the Arman 114, arrived in Baniyas via the Suez Canal with 1.3 million barrels of crude oil.

The report noted that most ships were targeted after they set out from ports in southern Iran and crossed the Red Sea, navigating the Suez Canal to the Mediterranean. Other vessels are using a longer route around Africa and passing through the Straits of Gibraltar into the Mediterranean.

Each shipment could include a million or more barrels of oil, worth up to $50 million. Israeli authorities claim Iran is using payments for the oil to support weapon supplies to Lebanon’s Hezbollah.

US and regional officials said “at least a dozen” ships, carrying oil or cargo, have been attacked with weapons like water mines since late 2019.

Iranian State TV said the MV Saviz, a cargo ship and suspected base for the Revolutionary Guards, was attacked with limpet mines in the Red Sea off Yemen on April 7. The cargo ship Shahr-e Kord was struck on March 13.

Iran has propped up the Assad regime since 2011 with billions of dollars in lines of credit, including for oil supplies. Tehran has tried to the shipments in defiance of US and European sanctions, but the Assad regime is facing a fuel crisis in areas under its control.

There was confusion in Iran’s media on Saturday, with some outlets reporting an attack, others denying that the tanker was Iranian, and still others ignoring the episode.

Al-Alam TV said the tanker was one of three that recently arrived at the oil terminal in Baniyas. Tasnim denied any Iranian connection. Press TV does not carry a report.