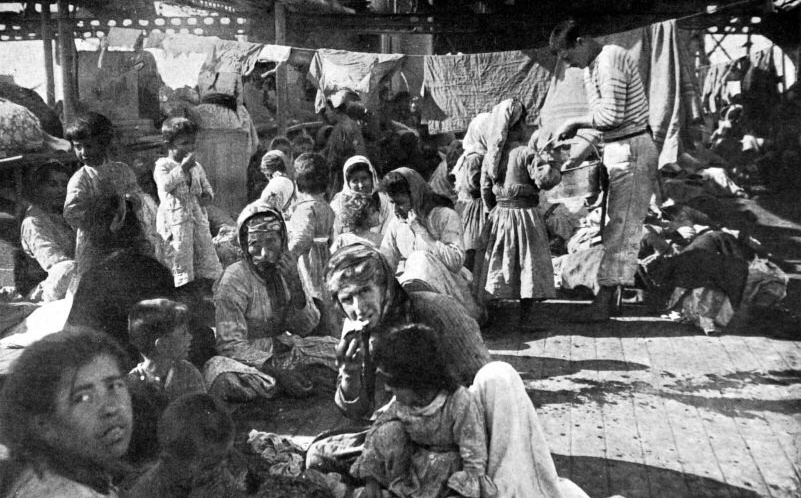 The Erdoğan Government has issued more statements condemning the Biden Administration’s recognition of the Ottoman Empire’s mass killing of Armenians as a genocide.

The Foreign Ministry summoned the US Ambassador to Turkey, David Satterfield, to declare that President Joe Biden’s statement, issued on Armenian Genocide Remembrance Day, “does not have a scholarly and legal basis, nor is it supported by any evidence”.

Daily Sabah, close to the Government, pushes back with headlines such as “Exhibition Honors Turkish Diplomats Killed by Armenian Terrorists” and “Pakistan Supports Turkey’s Thesis on 1915 Events”.

Inside Turkey, the People’s Democratic Party (HDP), associated with Kurdish and other minority groups, has challenged the Government’s position: “Turkey has to face up to the Armenian Genocide….The great crime went unpunished, discrimination and hate crimes have thus became commonplace”.

On the 106th anniversary, we feel the genocide against the Armenians, the autochthonous people of these lands, the great catastrophe and human tragedy in our hearts, and we remember the murdered with respect and mercy.

Ömer Çelik, the spokesman of the ruling Justice and Development Party (ADP), hit back on Twitter: “You better face with the slaughters committed by the massacre gang, named the [Turkish Kurdish insurgency PKK]. What you say is not true. The stance you have is not true because the place where you are connected is inhuman.”

Politico has posted an information background article on how the Biden Administration shifted decades of US policy with the recognition of genocide.

The post begins with Antony Blinken, now Secretary of State, telling an Armenian American activist of the Obama Administration’s failure: “We were on the wrong side of that issue. We should have gotten that right.”

President Joe Biden has recognized the Ottoman Empire’s mass killing of Armenians during World War I as a “genocide”.

The American people honor all those Armenians who perished in the genocide that began 106 years ago today. Let us renew our shared resolve to prevent future atrocities from occurring anywhere in the world. And let us pursue healing and reconciliation for all the people of the world.

We have nothing to learn from anybody on our own past. Political opportunism is the greatest betrayal to peace and justice.

We entirely reject this statement based solely on populism.#1915Events

The Turkish Foreign Ministry chided, “The nature of the events of 1915 does not change according to the current political motives of the politicians or domestic political considerations. Such an attitude serves only a vulgar distortion of history.”

In contrast, Armenia’s Deputy Foreign Minister Avet Adonts said at a memorial on Armenian Genocide Remembrance Day that Biden’s declaration was an “important step” which will “serve as an example for the rest of the civilized world”.

Armenian Prime Minister Nikol Pashinyan added, “The US has once again demonstrated its unwavering commitment to protecting human rights and universal values.”

Biden’s statement continued with a tribute to Armenian Americans: “With strength and resilience, the Armenian people survived and rebuilt their community. Over the decades Armenian immigrants have enriched the United States in countless ways, but they have never forgotten the tragic history that brought so many of their ancestors to our shores.”

ORIGINAL ENTRY, APRIL 24: President Joe Biden tells Turkish counterpart Recep Tayyip Erdoğan that he intends to recognize the Ottoman Empire’s 1915 massacre of hundreds of thousands of Armenians as “genocide”, according to “sources familiar with the conversation”.

The two leaders spoke on Friday for the first time since Biden was inaugurated on January 20. The delay in communication has been seen by some as Washington keeping Ankara’s at arm’s length, possibly because of Erdoğan’s maneuvering with Russian President Vladimir Putin.

Neither the White House readout nor the statement from Erdoğan’s office mentioned Armenia. However, Reuters cited multiple sources, CNN referenced a “person familiar with the conversation”, and Bloomberg quoted “people familiar with [the] call”.

Over decades, White House statements have labelled the killings a “great evil. In 1981, President Ronald Reagan used the term, but he quickly backtracked under Turkish pressure. President Barack Obama said in 2008, campaigning for the White House, that he would cite genocide, but in his eight years in office he stopped short with labels such as “tragedy”, “mass atrocity”, and “horror”.

Biden said in his Presidential campaign that he “recognize the Armenian Genocide and make universal human rights a top priority”.

See also World Unfiltered: Turkey and Biden Administration — Is There A Way Forward?

Throughout this week, Erdoğan, his officials, his allies, and his media outlets have stepped up their statements pushing back any designation.

On Tuesday, Foreign Minister Mevlüt Çavuşoğlu warned, after saying Biden’s words have no legal effect, “If the United States wants to worsen ties, the decision is theirs.”

The next day, Erdoğan declared that he and his Government would “continue to defend the truths in the face of the lie of ‘genocide of Armenians’ and those who are backing this slander with political calculations”.

Armenian groups say 1.5 million of about 2.5 million Armenians in the Ottoman Empire were slain. Turkish officials say that both sides suffered casualties during World War I, with 300,000 Armenians perishing. Most expert estimates range from 600,000 to 1.5 million, including an estimate of 800,000 by Ottoman authorities covering 1915 to 1918.