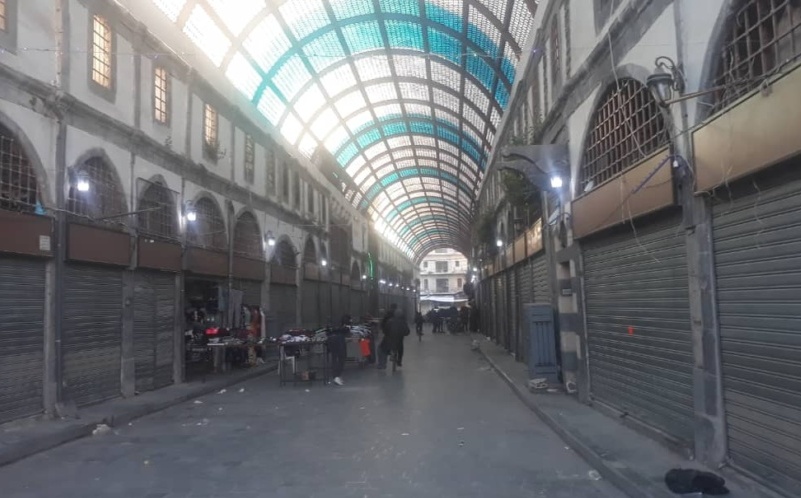 Amid failure to reconstruct damaged areas in Syria’s 121-month conflict, the Assad regime is threatening to seize shops in markets in the city of Homs.

Syria Direct reports on the threat launched last November by the Homs City Council. Shopkeepers are instructed to begin to rehabilitate and “re-utilize their shops” within two months “under penalty of legal procedures per the applicable laws and regulations”.

Many of Homs’ markets were devastated or abandoned during the years-long attempt by the regime to regain Syria’s third-largest city. Bashar al-Assad’s force waged an intense bombing campaign from early 2012, and recaptured almost all of the opposition area in May 2014. The last opposition-held neighborhood, al-Waer, surrendered in March 2017, with residents and fighters forcibly transferred to northwest Syria.

The Assad regime has trumpeted “rehabilitation” of captured territory, but as in other cities, there has been little progress with repairs of Homs’ markets.

“Abu Ahmad” says of his shop in the al-Naoura Market, “I want to clean it up and install a door until I have the money to open it,” but first he must comply with the City Council’s order.

The shopkeeper says that, unsure what “legal procedures” means, he has had to borrow money from a relative abroad to pay the initial repair costs of 5 million Syrian pounds (about $1,250). But he needs an additional SYP 20 million (about $5,000) to operate the shop in a country where the average monthly salary is about 150,000 SYP.

The City Council extended the deadline for compliance on January 17. But at the same time, it applied the threat of closure to all shops and offices in the center of Homs, setting a two-month deadline for rehabilitation and use.

The Council claims on its Facebook that more than 234 shops began repairs after the notices were issued, but comments express anger at “the language of warnings and threats for traders rather than motivating them with tax breaks, providing electricity and repairing the roads”.

Syrian lawyer Muhammad al-Joujah, who now lives in Turkey, says the notices have no legal basis because they are not backed by executive or legislative decrees. However, he says they seek to “intimidate and terrorize the citizens to activate the city center markets and portray life as having returned to normal in regime-controlled areas”.

“Abu Azmi”, who has a shop near the Covered Market, explains that he has returned after seeing the notice.

If I hadn’t seen it, the deadline would have gone by, and I would have lost my shop. Why are important official notifications not being published on social media pages or on Syrian State television, for those concerned to see them and act before it is too late?

The area and roads have not been repaired, so there are few customers. But the shopkeeper says officials are demanding five years of accumulated rent, approximately SYP 250,000.

The Directorate of Endowments appears to have ignored the complaints. On March 31, it gave tenants in the Heritage Market one month to “pay the rent” before they were evicted.

Regime officials are also seizing homes and farmland in central and western Syria, raising funds by auctioning the properties.