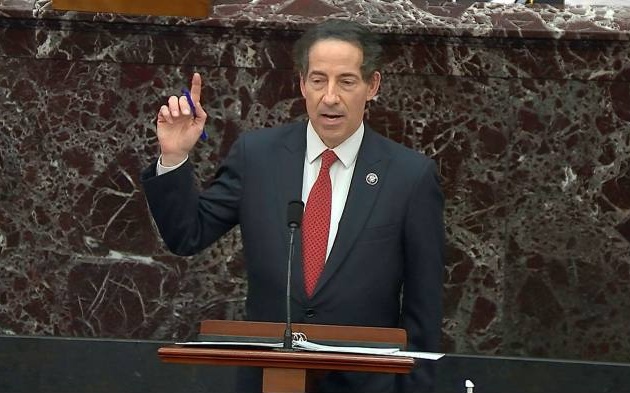 After a dramatic presentation by House impeachment managers of Donald Trump’s rhetoric and the attack on the US Capitol, the Senate votes 56-44 to proceed with the trial over “incitement of insurrection”.

Six Republicans joined all 50 Democrats in rejecting the argument by Trump’s attorneys that it is unconstitutional to try a President who has left office. They are Susan Collins of Maine, Lisa Murkowski of Alaska, Mitt Romney of Utah, Ben Sasse of Nebraska, Patrick J. Toomey of Pennsylvania, and Bill Cassidy of Louisiana.

Despite the intensity of the video presentation by the House managers, Cassidy was the only GOP Senator to shift position from late January, when 45 of 50 Republicans voted against any proceedings.

It is highly unlikely that 17 Republicans will join all 50 Democrats for the 2/3 majority needed to convict Trump.

Sen. Ted Cruz of Texas, a backer of Trump’s attempts to block President-elect Biden during and after the Capitol attack, hailed the political situation: “The result of this trial is preordained. President Trump will be acquitted.”

Sen. Tim Scott of South Carolina echoed, “Not a single thing will change. The outcome is set.”

“This Cannot Be Our Future”

Still, the power and emotion of the House managers’ presentation was a sharp contrast to the rambling arguments and angry invective of Trump’s lawyers Bruce Castor and David Schoen.

The managers cited conservative legal scholars among the more than 150 Constitutional experts who have written that Trump can and should be tried. Their graphic video presentation intersected Trump’s call on followers, to march on the Capitol and block the Congressional certification of Biden, with the violence of the attack and the threats to kill legislators and Vice President Mike Pence.

The lead manager Rep. Jamie Raskin recounted how his daughter and son-in-law, whom he had brought to the Capitol as a “safe place” on January 6, feared for their lives and how colleagues called their spouses and children “to say goodbye”.

We cannot have presidents inciting and mobilizing mob violence against our government and our institutions because they refuse to accept the will of the people.

Senators sat silently during the presentation. At one point, the screams of a police officer trapped in a door by the Capitol attackers rang through the chamber, as Raskin noted that five people died during the assault.

Some senators covered their faces, unable to cope with the images.

Everyone can see immediately why this is so dangerous. It is an invitation to the president to take his best shot at anything he may want to do on his way out the door, including using violent means to lock that door, to hang on to the Oval Office at all costs and to block the peaceful transfer of power.

Trump Angered by His Lawyers

Trump’s attorney Castor wandered, spending much of his talk complimenting “patriotic” senators and the case made by the managers. He indicated that the defense team had been caught off guard by the powerful presentation, making a last-minute switch in the order of their appearances. He refuted Trump’s claim of a “stolen election”. And he indicated that if the case was established, Trump should be arrested on criminal charges.

A high crime is a felony, and a misdemeanor is a misdemeanor. After he’s out of office, you go and arrest him.

The performance reportedly infuriated Trump, watching from his Mar-a-Lago resort in Florida. One confidant said Trump “was an eight” on an anger scale of 1 to 10.

Multiple people tell me Trump was basically screaming as Castor made a meandering opening argument that struggled to get at the heart of the defense team's argument.

Schoen tried denigration, assailing the showing of the video as “a blood sport”. He said Democrats are driven by an “insatiable lust” to destroy Trump, and claimed Trump’s conviction would likely cause a second Civil War.

Republican Sen. Cassidy said, “Anyone who listened to President Trump’s legal team saw they were unfocused, they attempted to avoid the issue and they talked about everything but the issue at hand.”

Sen. Collins said she was “perplexed” by Castor, as he “did not seem to make any arguments at all, which was an unusual approach to take”.

Even Sen. Cruz said he did not think Trump’s lawyers did “the most effective job”, while praising Raskin as “impressive”.