UPDATED: “We Are Facing Famine” — Flour and Bread Cut Off for Displaced in Rukban Camp 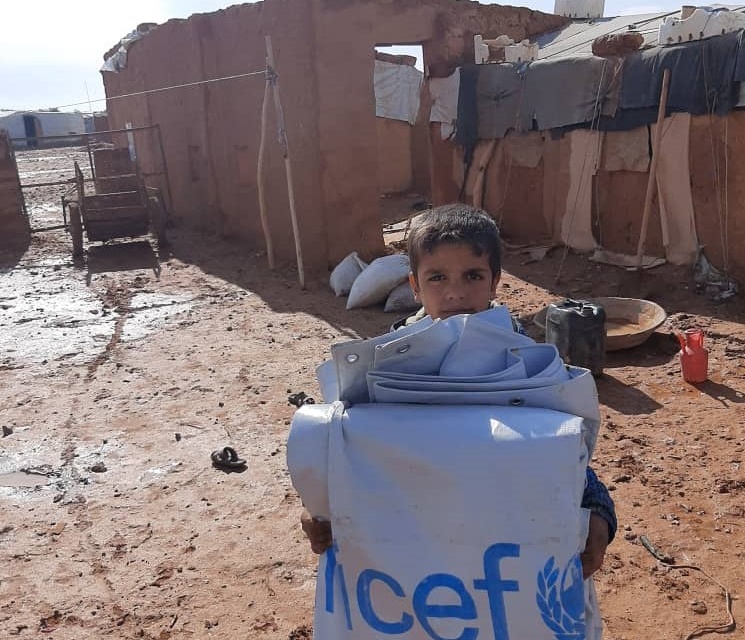 A boy holds a tarpaulin supplied by private donors to the Rukban camp for displaced persons in southeast Syria, December 2020

Syria Direct posts latest news about the bread crisis in the Rukban camp for about 13,000 displaced Syrians.

While the exact reason for the escalation in the crisis is unclear, the Assad regime appears to have tightened the siege on the camp which was imposed in September 2018.

Resident Abu Khaled al-Homsi says the story in the camp is the closure of a road from Homs. Others speak of a regime crackdown on smuggling.

Residents are surviving by baking their own bread or using alternatives such as rice and bulgur.

Abu Ahmad said a small amount of flour reach the camp on Sunday, “enough to cover the needs of the residents for one week only”.

Residents of the Rukban camp report that they have gone for more than a week without flour and thus bread, raising the prospect of starvation.

The displaced civilians are appealing for assistance to bring flour across the Jordanian border, which has been closed since June 2016 after an Islamic State attack.

We are facing famine….We ask the world.not for ourselves but to save our children….Help our children.

Another explains, “We are isolated, abandoned to our fate. Between closed borders and the forces of the Syrian Regime, we have nothing.”

About 13,000 civilians continue to hold out against Russian and Assad regime siege and pressure, in part out of fear of detention, intimidation, and loss of property if they return to their home areas.

The UN’s Commission of Inquiry on Syria reported last August that it had reports of the detained of more than 100 Rukban evacuees, with “first-hand accounts that men had been systematically deprived of their liberty”.

ORIGINAL ENTRY, DEC 28: After more than five years in the Rukban camp in southeast Syria, about 13,000 displaced civilians continue to face a humanitarian crisis over blocked and diverted aid.

The crisis is a combination of a Russian-Assad regime siege since September 2018, a Jordanian border closed since 2016, and the diversion of aid that does get near or into the camp.

The last UN convoy, only the third allowed by the regime since January 2018, was in September 2019. Even that was stripped of items such as medical kits before it reached Rukban.

Russia and the regime have cutting the main road into the camp, blocking both aid and the supply of goods by smugglers. So humanitarian organizations have been trying to provide assistance from Jordan, despite the border locked down after a 2016 suicide bombing by the Islamic State which killed several Jordanian personnel.

In November, an anonymous donor provided tarpaulin to help upgrade tents for winter, after the UN —- despite its promises — failed to provide the necessary provisions for winterization over the past three years.

Unlike UN assistance, distributed on the basis of registration, the tarps were “triaged” to go to those most in need. The next shipment was earmarked for the few women living in the camp without families.

But both the Civil Administration and the Local Council of Rukban are struggling to coordinate any aid, with one donor explaining to EA, “All the information I get from all these councils, I have to cross-check three times and then I stil get three ‘truths’!”

One resident tells Syria Direct, “There are donations that come personally to individuals from outside the country….[However], they reach relatives or friends, and do not reach all those in need.”

The donors of the tarpaulins explained the difficulties, even though Russian and regime pressure — leading to shortages of food, medical facilities, and other essentials — has reduced the camp’s population from a high of 75,000.

Their guidance is “to start with the poorest and most vulnerable” such as about 30 widows and their families.

But one donor said implementation is far from assured: “I’m not trying to follow up on everything that is going on on the ground; it’s just like a complete maze. There is always contradictory information from various parties.”

Lack of documentation is a further problem. The Rukban resident explains, “If an agency provides support to someone inside the camp without announcing [its extent], then we cannot hold this person accountable for receiving one hundred food baskets and only distributing fifty.”

So, another donor explains, the emphasis has been on establishing “trusted contacts” within the camp to limit diversions.

Waiting for A “Pharmacy of Hope”

Syria Direct provides an example of a “Pharmacy of Hope”, providing free medicine, which is still awaited.

The Russian-regime siege has reduced Rukban’s medical facilities to a rudimentary clinic staffed by nurses. An effort to establish a clinic in Jordan, just across the border, needs the permission of Amman’s officials. Entry into Rukban by a doctor must have US authorization and de facto acceptance by Russia and the regime.

See also A Doctor for the 13,000 Displaced in Syria’s Rukban Camp?

The US-based Syrian Emergency Task Force announced the pharmacy’s opening in November. However, residents still have not seen it.

A Civil Administration member said distribution of medicine may have been delayed because the pharmacy’s manager “is not specialized in this medical field and [works] without a committee to supervise his work”.

SETF Executive Director Moaz Mustafa said a four-person committee, including a medical official and a warehouse keeper, has been formed.

But the Civil Administration member said residents fear “aid destined for the camp is exploited and does not reach those who deserve it”.

Rukban’s residents fled to the barren area in 2015 from Homs Province in central Syria amid Islamic State attacks. They have held out against Russian-regime efforts for transfer, despite the forced deprivation of the siege. They express fear of regime harassment, detention, and even disappearance and killing.

But a media activist in Rukban summarizes the further difficulties from those capitalizing on the aid crisis:

Since organizations cannot enter the camp, they rely on people who may be at times exploiting the needs of the camp and the humanitarian situation and trying to be first-class beneficiaries, either them or their relatives.

Among the features of exploitation are people who communicate with organizations or associations from inside the camp to earn their sympathy and raise money from them.

One of the donors highlights an incident in 2019 where “several beneficiaries did not receive their benefits as the person [delivering the aid] signed on their behalf and took their share”. The intermediary was soon changed.
The Civil Administration member said it is difficult to hold perpetrators to account because “every regional or tribal grouping in the camp stands on the side of the son of [their] clan, even if he is wrong”.

The donors press on, even if they have to deal indirectly with an Assad regime diverting aid even as it blocks Rukban.

One donor talks about the newly-arrived tarpaulins: “The best tarps were from the UN, stolen by regime thugs in UN warehouses, then sold to any shops where people can buy them. It’s absolutely obscene.”

Still, amid the five years of Rukban’s plight, there are stories of those who have held out against the exploitation.

One Europe-based donor recounts to EA:

Every time I send financial support for an aid distribution, I tell my contact to include his own family in the group of beneficiaries. But he always refuses.

Only other family members living abroad are allowed to support his family, but never me!

The donor notes an effort by a registered NGO to remotely put a team of humanitarian workers of people inside Rukban, training them on humanitarian aid matters and establishing sustainable projects for self-sufficiency and independence.