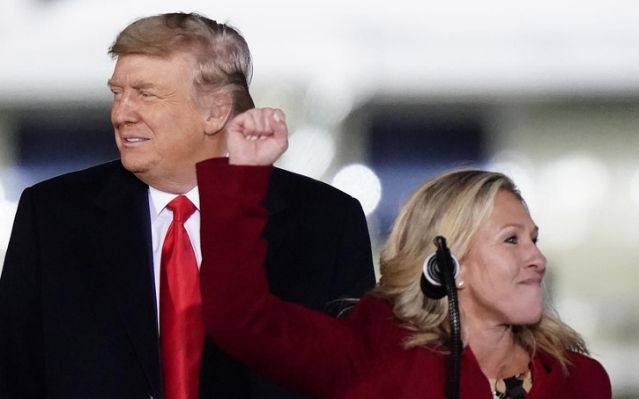 Before the House vote on Thursday to remove GOP Rep. Marjorie Taylor Greene from her committee posts, I spoke with Turkey’s TRT World about the Republican Party’s accommodation of Greene’s threats and conspiracy theories.

There’s a very fine line, perhaps no line between Trumpism and Marjorie Taylor Greene’s politics with its falsehoods and conspiracy theories.

You portray this as an Us v. Them America, where anytime you are called out for lies, you say it’s the “enemies within”. We’ve seen the previous occupant of the White House do it, and we’re seeing Marjorie Taylor Greene do it as well.

I also try to get beyond Greene to discuss the pressing issues in US politics, including measures to deal with the Coronavirus pandemic and its economic effects: “Do the Republicans work with the Democrats to get the American Rescue Plan through, or do they obstruct this?”

We discuss how GOP legislators have either embraced Trumpism or capitulated to Donald Trump, and how some have promoted Greene, who has supported the execution of House Speaker Nancy Pelosi, claimed that mass shootings such as the 2018 killings at a Florida high school were fake, and asserted that a “Jewish space laser” caused California wildfires.

I also chat about the state of the Trump impeachment trial, and highlight an emotional account by Rep. Alexandria Ocasio Cortez of the January 6 attack on the Capitol that threatened her and other legislators.

Listen to BBC Radio Scotland from 11:40

Alexandria Ocasio-Cortez’s account shows that the attackers were not there for a lark, were not just dressed in silly clothing and to have their photographs snapped — but were organized to seek out legislators and Vice President Mike Pence, possibly to harm or kill them.