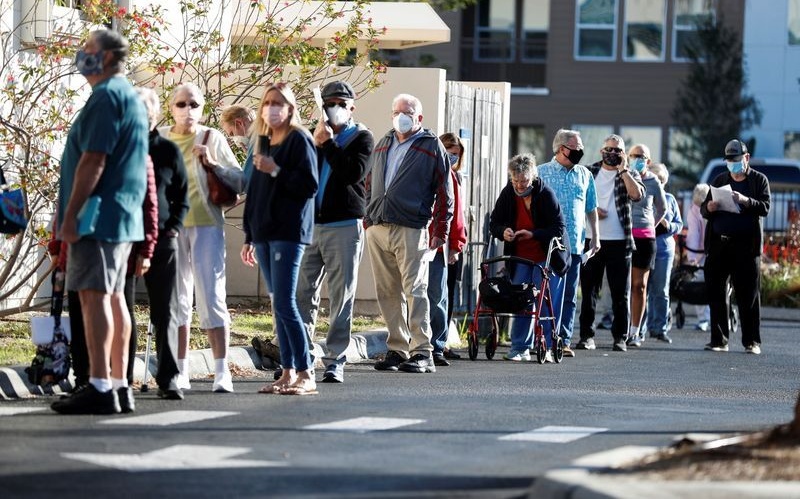 Congress passes the $1.9 trillion American Rescue Plan for the Coronavirus pandemic and the US economy, as President Joe Biden pledges to “act fast”.

The House adopted a budget resolution 219-209 on Friday, soon after Vice President Kamala Harris cast her tie-breaking vote for a 51-50 margin in the Senate.

The Senate vote was completely on party lines, and the House outcome almost so.

Biden said hours later at the White House, “I believe the American people are looking right now to their government for help to do our job, to not let them down. So I’m going to act, and I’m going to act fast.”

He noted the January jobs report, with only 49,000 jobs added and just 6,000 in the private sector. Unemployment is almost double its rate of a year ago, with a loss of 10 million jobs and many people unemployed for more than six months.

With 60 votes needed to stop any filibuster, the Senate adopted the process of budget reconciliation, requiring only a simple majority, to adopt the Plan.

House Speaker Nancy Pelosi said it was her goal to have a bill approved and moved to the Senate within two weeks.

Biden reinforced the message that while he preferred a bipartisan approach, he would pursue the legislation despite Republican opposition.

If I have to choose between getting help right now to Americans who are hurting so badly and getting bogged down in a lengthy negotiation or compromising on a bill that’s up to the crisis, that’s an easy choice. I’m going to help the American people who are hurting now.

What Republicans have proposed is either to do nothing or not enough.

Sen. Charles Grassley of Iowa, the top Republican on the Finance Committee, objected, “President Biden and congressional Democrats took the partisan route right out of the gate.”

The Administration is likely to lower the income threshold for those who will receive a one-off $1,400 direct payment, after the Senate voted 99-1 to adopt the measure. However, Biden assured that the amount, supplementing a $600 payment in an interim measure passed in December, will not be reduced.

I’m not cutting the size of the checks. They’re going to be $1,400, period. That’s what the American people were promised.

The Plan also includes $160 billion for vaccine distribution and development, Coronavirus testing, and the production of personal protective equipment; $20 billion to help schools reopen; and more relief for small businesses. There is aid for state and local governments in budget crises over funding of pandemic measures, and unemployment benefits are extended for six months for millions of Americans.

On Monday, Biden met a group of 10 Republican Senators offering a $618 billion counter-proposal. While the meeting was praised as a “very good exchange of views” by both sides, the GOP package exclude state and local aid and offered a reduced unemployment benefit for only three months.

Treasury Secretary Janet Yellen, who advised Biden to “act big”, said on Friday that the full $1.9 trillion is needed for social equity as well as economic recovery.

This is why the American Rescue Plan is badly needed: to make sure that this pandemic isn’t another generational setback for racial equality.

However, the final package is unlikely to retain the $15/hour minimum wage by 2025 for Federal workers. The Senate agreed to a proposal by GOP Sen. Joni Ernst of Iowa to prohibit any minimum wage increase during the pandemic.

Biden said in an interview with CBS News, “I put it in, but I don’t think it’s going to survive.”

Sen. Bernie Sanders pressed for the retention of the provision in the $1.9 trillion package.

The budget resolution the Senate passed today puts us on a path to finally raise the minimum wage to $15 an hour. It is a moral imperative in the richest country in the world that no one is forced to live on a starvation wage, and the American Rescue Plan will get it done.