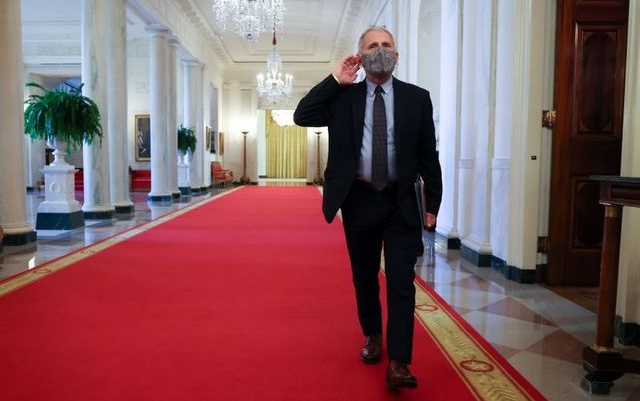 A year after the first Coronavirus case in the US, the new Biden Administration announces plans to contain the pandemic.

President Joe Biden pledged a “full-scale wartime effort” on Thursday, with executive orders such as mask mandates on interstate planes, trains, and buses and quarantine for travellers arriving in the US.

“History is going to measure whether we are up to the task,” Biden declared, alongside Vice President Kamala Harris and Dr. Anthony Fauci, his chief Coronavirus advisor.

The Administration published a 200-page “National Strategy for the Covid-19 Response and Pandemic Preparedness”. It set out a centralized Federal Government response that had been rejected by Donald Trump as he denied the threat of the virus for months.

Biden said in the White House briefing, “For the past year we couldn’t rely on the federal government to act with the urgency and focus and coordination that we needed, and we have seen the tragic cost of that failure.”

Hospitals are out of beds. Businesses are closed for good. Schools are caught in between. And while the vaccine provides so much hope, the rollout has been a dismal failure thus far. So I understand the despair and frustration of so many Americans, and how they’re feeling. I understand why many governors, mayors, county officials, tribal leaders feel like they’re left on their own without a clear national plan to get them through the crisis.

The plan includes Biden’s pledge for 100 million vaccines in his first 100 days in office. The Trump Administration had promised 20 million inoculations by December 31; as of Thursday, only 15.1 million doses had been administered.

Scott Gottlieb, former Food and Drug Administrator commissioner under Trump, said Biden’s plan should cover 65 million to 70 million Americans, since some have already had their first of two required doses.

“I think we can reach that goal and probably reach higher, by focusing on how many people are being vaccinated for the first time each day….We can definitely reach many more patients,” Gottlieb said.

But Biden acknowledged that, with issues about supply of vaccines before April because of manufacturing capacity, “The brutal truth is it’s going to take months before we can get the majority of Americans vaccinated.” He continued:

Let me be very clear. Things are going to continue to get worse before they get better. The Memorial we held two nights ago will not be our last one, unfortunately. The death toll will likely top 500,000 next month. The cases will continue to mount. We didn’t get into this mess overnight. That’s going to take months for us to turn things around. But let me be equally clear, we will get through this.

Jeff Zients, the new White House Coronavirus response coordinator, explained, “What we’re inheriting is so much worse than we could have imagined. The cooperation or lack of cooperation from the Trump administration has been an impediment. We don’t have the visibility that we would hope to have into supply and allocations.”

On January 14, Biden presented a $1.9 trillion “American Rescue Plan” with measures to contain the pandemic, ensure vaccine distribution, and prevent further economic damage to millions of Americans affected by the crisis. On Thursday, hours after taking the Inaugural Oath, the President signed executives orders requiring masks on all federal premises and by all federal employees and restoring the National Security Council’s Directorate for Global Health Security and Biodefense, which Trump had disbanded.

Biden emphasized on Thursday, “Experts say by wearing a mask from now until April, we’d save more than 50,000 lives going forward.”

He spoke of a strategy to safely reopen schools and businesses: “When you do that, think of all the people that can get back to work, be able to get back to work; all the mothers and single fathers that are staying home, taking care of their children.”

At a later press conference, Dr. Fauci contrasted the approach with that of Donald Trump and his advisors:

The idea that you can get up here and talk about what you know, what the evidence, what the science is and know that’s it, let the science speak, it is somewhat of a liberating feeling.

Fauci recalled Donald Trump’s falsehoods and misinformation, including Trump’s claim of the efficacy of the untested and unsafe drug hydroxychloroquine, that “were not based on scientific fact”. He alluded to punishment if he tried to correct Trump’s claims:

I can tell you, I take no pleasure at all in being in a situation of contradicting the President. So, it was really something that you didn’t feel that you could actually say something, and there wouldn’t be any repercussions about it.

The chief advisor set out a possible timetable for containment and suppression of the virus:

If we get 70 to 85% of the country vaccinated, let’s say by the end of the summer, middle of the summer, I believe by the time we get to the fall, we will be approaching a degree of normality. It’s not going to be perfectly normal, but one that I think will take a lot of pressure off the American public.