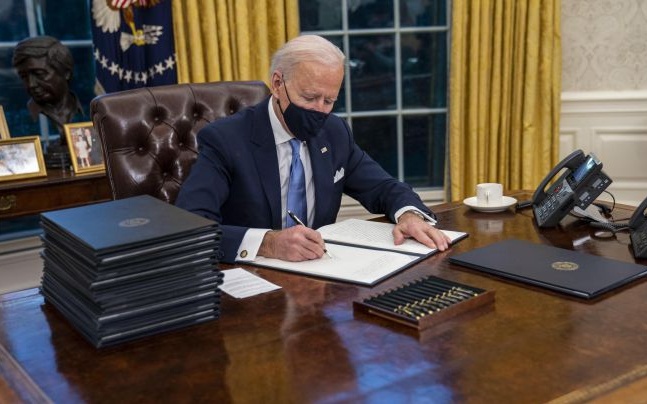 Biden signed 17 executive orders, memoranda, and proclamations from the Oval Office on Wednesday afternoon, hours after delivering his Inaugural Address in which he spoke of “much to do in this winter of peril and significant possibilities”.

The US is rejoining the Paris Accord on climate change and the World Health Organization. The “Muslim Ban”, the Trump Administration’s first executive order that barred citizens from six mainly-Muslim countries from entering the US, is reversed.

Steps to deal with the Coronavirus pandemic, which has killed more than 400,000 Americans, include:

Dr. Anthony Fauci, the Government’s top infectious disease specialist, will participate in the WHO’s annual executive board meeting on Thursday.

Biden acted to protect almost 800,000 “Dreamers”, children who came to the US with undocumented immigrant parents, from deportation that had been threatened by Trump.

The Department of Homeland Security announced on Wednesday that it is pausing deportations for some non-citizens from Friday for 100 days. A statement explained, “The pause will allow DHS to ensure that its resources are dedicated to responding to the most pressing challenges that the United States faces.”

Another executive order revoked the Trump Administration’s plan to exclude non-citizens from the census count. Construction of Trump’s Wall with Mexico is halted as the Biden Administration examines the legality of the wall’s funding and contracts.

The Trump program forcing migrants to wait in Mexico, while their cases are pending in US courts, is suspended; however, a Coronavirus mandate that has effectively sealed the border to asylum seekers remains in place.

The new President has indicated that another order will command agencies to assist children forcibly separated from undocumented immigrant parents in 2018. Of the almost 3,000 juveniles seized, 545 have not been reunited with their parents, deported by Trump officials.

The Administration will propose legislation for immigration reform which includes an eight-year path to citizenship for millions of undocumented immigrants who are established in the US.

In addition to repealing the “Muslim Ban”, imposed against several predominantly Muslim and African countries, Biden addressed the State Department to address the harm caused to those prevented from coming to the US because of Trump’s actions.

He then issued the executive order beginning the restoration of environmental protections stripped by his predecessors. They included reinstitution of vehicle emissions standards; a moratorium on oil and natural gas leases in the Arctic National Wildlife Refuge; revocation of the permit for the Keystone XL pipeline through Montana and South Dakota to Nebraska; and re-establishment of a working group on the social costs of greenhouse gases.

Gina McCarthy, Biden’s national climate adviser, said the measures “begin to put the U.S. back on the right footing, a footing we need to restore American leadership, helping to position our nation to be the global leader in clean energy and jobs”.

As he promised during the campaign, Mr. Biden took several steps on Wednesday to help Americans struggling through continued financial hardship brought on by the pandemic, in some cases reversing policies embraced by his predecessor.

He extended a federal moratorium on evictions and asked agencies, including the departments of Agriculture, Veterans Affairs and Housing and Urban Development, to prolong a moratorium on foreclosures on federally guaranteed mortgages. The extensions all run through the end of March.

Another order targets Americans with heavy educational debt, continuing a pause on federal student loan interest and principal payments through the end of September.

All federal agencies have been instructed to make equity a central consideration in their work. The executive order requires a report within 200 days to address the removal of barriers to opportunities in policies and programs. Biden also directed agencies to conduct reviews to eliminate systemic discrimination in policies and spending.

Another executive order guides the federal government not to discriminate on the basis of sexual orientation or gender identity, reversing the Trump Administration’s orders, and reinstates the ability of agencies to use diversity and inclusion training.

Biden canceled the 1776 Commission, set up by Trump as he denigrated the belittled the 1619 Project studying the history of slavery and racial issues in the US.