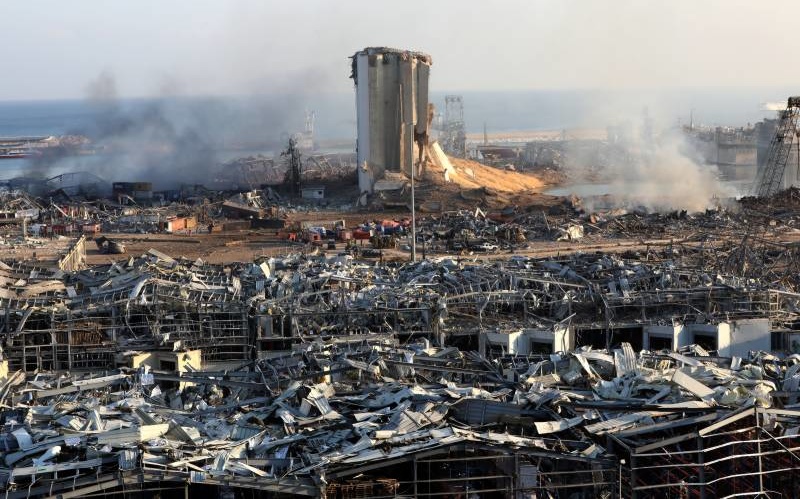 The port of Lebanon’s capital Beirut after an explosion of ammonium nitrate, August 4, 2020 (Anwar Amro/AFP/Getty)

Three Syrian businessmen linked to the Assad regime have been connected to the devastating port blast in Lebanon’s capital Beirut in August.

An investigation has tied George Haswani and the brothers Imad and Mudalal Khuri to the company which bought the ammonium nitrate that was stored in a port warehouse since November 2013.

The detonation of 2,750 tons of the nitrate on August 4 destroyed the port, causing at least 204 deaths, and 7,500 injuries, and $15 billion in damage. With the force of a 3.5 magnitude earthquake, the blast levelled the immediate area, which provides 60% of Lebanon’s imports, and much of Beirut.

The three men are also Russian citizens and have been instrumental in Moscow’s recruitment of Syrian youth as it props up the Assad regime. They have been sanctioned by US for providing services to the regime.

Get ‘Em While They’re Young: Russia’s Youth Strategy for Syria

Companies formerly directed by Haswani and Imad Khuri have the same addresses as Savaro Limited, the firm that purchased the ammonium nitrate in July 2013.

Savaro’s secretary, a board member overseeing operations, held the same position at a company directed by Imad Khuri.

In its November 2015 statement of sanctions, the US Treasury said Mudalal Khuri was an intermediary for the regime “on an attempted procurement of ammonium nitrate in late 2013”. Imad Khuri was sanctioned in July 2016 for support of his brother’s activities.

The Assad regime has used ammonium nitrate in weapons such as the barrel bombs dropped on Syria’s civilians.

Mudalal Khuri has been the Assad regime’s main financial broker in Moscow since 1994, working through a network of shell companies. He is a minority shareholder in Russian Tempbank, accused by the US Treasury of bolstering Syria’s currency reserves and assisting the State oil company.

Tempbank reportedly arranged up to six deliveries of millions of dollars in cash to the Central Bank of Syria by plane from Moscow between 2012 and 2016. The Russian bank was forced to close in 2017 by US sanctions.

Khuri’s network has also been linked to the Scientific Studies Research Center, the regime’s main complex for development of ballistic and chemical weapons.

Savaro, registered as a chemical trading company in the UK, has few if any employees and little actual business. Its registered director, Marina Psyllou, is an officer for at least 157 companies, most in the UK and Panama.

Savaro’s address of 10 Great Russell Street in London is used by dozens of other companies – including Hesco Engineering and Construction, directed by Assad-linked businessman Haswani from 2005 to 2014.

Savaro’s second address of 13 John Prince’s Street in London is the same as that of IK Petroleum Industrial Company Limited, directed by Imad Khuri from 2013 to 2016. The address is also used by Omega Direct Limited, allegedly affiliated with Haswani’s company Hesco.

On Tuesday, Psyllou on Tuesday filed a request to dissolve Savaro.