Iran Daily: Authorities Crack Down on Journalists of Anti-Corruption Site 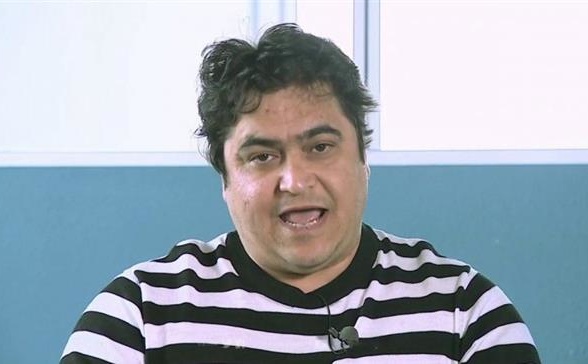 Iran’s authorities have detained — allegedly through abduction in Iraq — the founder of an anti-corruption website and are using him in an effort to seize his colleagues.

The Revolutionary Guards announced on October 13 that Rouhollah Zam (pictured), who launched AMAD (Awareness, Struggle, and Democracy) News, was captured by its intelligence organization. Zam’s wife alleged that the journalist, who was based in Paris, was deceived into travelling to Iraq, where he was kidnapped.

The Guards statement asserted that Zam was “led” by the French intelligence service and supported by American, Israeli, and other intelligence agencies. Spokesman Ramezan Sharif said that a “significant number” of people in Zam’s “network” have been identified inside Iran.

The Guards followed up with a warning on Wednesday, “Those who have not yet learned from the chain failures of the global arrogance against the Islamic Revolution…had better join the nation as soon as possible instead of serving [foreign] intelligence services.” It said those who surrendered will be granted clemency.

MP Ali Motahari warned authorities against using “forced confessions” to incriminate other targets. But the IRGC’s Sharif insisted, “Zam’s confessions are not much needed since the IRGC (Islamic Revolutionary Guards Corps) has already captured many of his contacts inside the country.”

AMAD, which has been renamed Seda-ye Mardom (Voice of the People) posted articles claiming to expose corruption in the Islamic Republic.

Iran has been beset for years by high-profile corruption cases. Senior officials of the Ahmadinejad Administration of 2005-2013 have been given long prison sentences: they include Vice Presidents Mohammad Reza Rahimi and Hamid Baghaei. Tycoon Babak Zanjani is facing the death penalty on claims he embezzled more than $2.7 billion of State funds, and the head of Iran’s largest financial institution, Bank Melli, fled to Canada to avoid imprisonment.

The issue is bound up with political in-fighting. Three weeks ago, the charge was used to hand a five-year sentence to President Hassan Rouhani’s brother Hossein Fereydoun.

Hardline critics of Rouhani used the announcement of Zam’s detention to attack Rouhani, claiming the President’s associates had been informers for the journalist.

The head of the Presidential Guard, Alireza Khan Karami, said no one in Rouhani’s office has been detained.