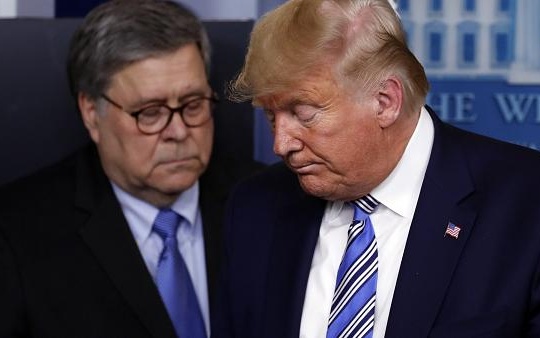 With pressure from Trump in meetings and on Twitter over Barr’s refusal to declare fraud in the US Presidential election, the Attorney General submitted his resignation letter on Monday.

He covered up an angry meeting with Trump over no public disclosure of a Justice Department inquiry into the tax affairs of President-elect Joe Biden’s son Biden, and over his statement that the Department had found no evidence of widespread fraud in the November 3 vote.

“As discussed, I will spend the next week wrapping up a few remaining matter important to the Administration and depart on December 23rd,” Barr wrote.

He played to Trump’s ego, proclaiming “many successes and unprecedented and achievements”, and continued his attempt to bury the Mueller Report’s findings of cooperation between the Trump campaign and Russian officials in 2016.

Barr decried a “partisan onslaught” and defied the Report’s evidence and conclusions with the insistence of “frenzied and baseless accusations of collusion with Russia”.

Having insulted the Attorney General in recent days on Twitter, Trump responded with praise:

Just had a very nice meeting with Attorney General Bill Barr at the White House. Our relationship has been a very good one, he has done an outstanding job! As per letter, Bill will be leaving just before Christmas to spend the holidays with his family…

Trump started Rosen’s term by falsely implying that Rosen had found the electoral fraud which Barr would not declare. In fact, Rosen’s statement that “foreign actors are covertly trying to undermine confidence in our elections” referring to involvement — including by Russia — in 2016 and not in 2020.

Trump raised the prospect of Barr’s dismissal at a Friday meeting, according to “a person familiar with the matter“.

Sources said Trump was in a fury that a two-year Justice Department inquiry into the tax affairs of Hunter Biden, the son of President-elect Joe Biden, was not made public before the November 3 election.

Trump was also upset at reports that Barr was considering a departure from the Administration before January 20.

On Saturday, as he raged about Biden’s victory, Trump lashed out at Barr on Twitter. He retweeted a message that Barr “should be fired by the end of business today”, adding, “A big disappointment!”

Declaring that Biden is guilty of espionage and treason, Trump continued:

IF Biden gets in, nothing will happen to Hunter or Joe. Barr will do nothing, and the new group of partisan killers coming in will quickly kill it all. Same thing with Durham. We caught them cold, spying, treason & more (the hard part), but “Justice” took too long. Will be DOA!

He wailed, “Why didn’t Bill Barr reveal the truth to the public, before the Election, about Hunter Biden?”

The Protector Distances Himself

Appointed in January 2019, Barr immediately gave Trump essential protection. He buried the Mueller Report on Trump-Russia links, misrepresenting its findings of cooperation between the Trump campaign and Russian officials — and of possible crimes, such as obstruction of justice, by Trump and his associates — as “No Collusion”.

Barr also tried to shield Trump during the Ukraine scandal, impeachment, and trial with a series of diversions from the core issue of Trump’s pressure on Kiev for “dirt” on Democratic nominee Biden. He continued the effort through Trump’s impeachment and trial, promising investigations of US agencies for supposed efforts to undermine the Trump campaign and Administration. He authorized US Attorney John Durham to pursue an inquiry into the FBI.

But on October 9, Barr announced that Durham would not be issuing the report that Trump hoped would tear down Biden and the Democrats.

At the start of December, Barr told the Associated Press that the Justice Department had uncovered no evidence of fraud that would change the outcome of the election.

Trump erupted. He castigated Barr in their heated White House meeting and told reporters, “He hasn’t done anything. He hasn’t looked for [fraud].”

Questioned if he still had confidence in the Attorney General, Trump replied, “Ask me that in a number of weeks from now. They should be looking at all of this fraud.”

Trump has told aides that he wants Barr to name Durham or another official as Special Counsel, making it more difficult for the Biden Administration to end the inquiry. But Barr is unlikely to implement the command, according to “people familiar with the thinking“.

That raises the question of whether Trump will remove Barr and find a loyalist to follow his directions.

Last weekend, reports circulated that the Attorney General was considering his departure. With Trump losing the election, Barr believed his work at the Justice Department was done.

Republicans asked Barr to stay, and the Attorney General let Trump’s inner circle know that he would remain until Biden’s inauguration on January 20.

A source said the “relationship” between Trump and Barr is now “a Cold War”.

Barr cannot be intimidated by Trump. This is the real story. None of this matters — it’s the deposed king ranting. Irrelevant to the course of justice and to Trump’s election loss.