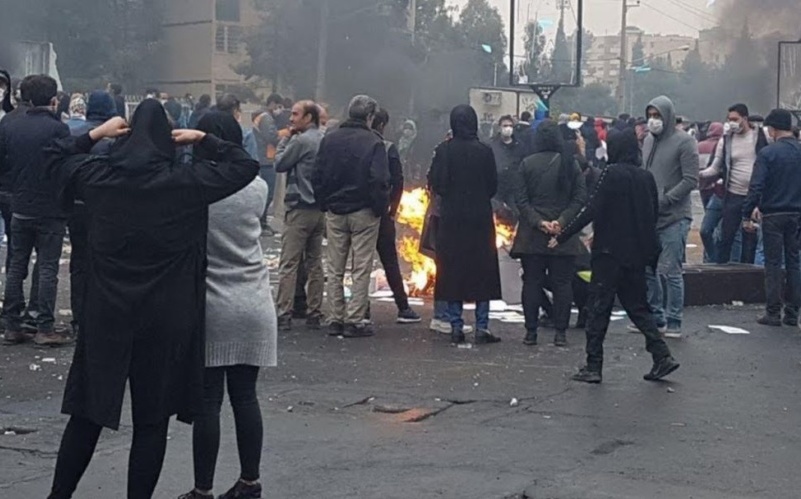 Demonstrators at a protest over economic conditions in Iran, November 2019

The UN Special Rapporteur for Human Rights in Iran, Javaid Rehman, has told the General Assembly of his “shock” at the use of force against protesters last November.

In his third report to the Assembly, Rehman wrote:

The Special Rapporteur expresses his shock at the unprecedented use of excessive and lethal force by State security forces during the November 2019 protests, including by the police, the Islamic Revolutionary Guard Corps and its Basij militia.

The report reinforced the detailed assessment by Amnesty International of at least 304 people slain by security forces in 37 cities from November 15 to 19. Among the victims were 23 children and 10 women.

Rehman also stressed that Iranian paramilitary and police shot to kill: “The pattern of shooting at vital organs, established by eyewitness accounts, video footage and the documented causes of deaths, demonstrates that security forces were ‘shooting to kill’ or with reckless disregard as to whether their actions caused death.”

He criticized authorities for not announcing official figures on injuries and deaths, and said the actual toll may be far higher than 304 fatalities.

The five-day protests across the country were sparked by the Government’s sudden increase of 50% to 200% in petrol prices.

Amnesty has detailed the killing of at least 304 demonstrators, many shot at close range and as they fled, by security forces. Three Iranian officials spoke of 1,500 people — marchers, security forces, and bystanders — who were slain, although the Government only acknowledged 230 fatalities in June, 6 1/2 months after the demonstrations.

Amnesty’s latest report considers the arrest of more than 500 of the 7,000 men, women, and children, as young as 10 years old, who were detained. It is based on interviews with 66 individuals inside Iran and 10 outside the country: 60 victims of arbitrary arrest, enforced disappearance, torture and other ill-treatment or their relatives or close acquaintances; two protesters who were in hiding; and 14 witnesses and investigators.

Iranian officials, including President Hassan Rouhani and judiciary Ebrahim Raisi, did not reply to Amnesty’s request for a response.

Mass Arrests and Torture: “It Will Be Like A Dog Dying”

While many of the arrests took place during the protests, some people were seized from their homes, workplaces, and hospitals. in the weeks that followed. Some were bystanders.
Others were student activists, journalists, and human rights defenders.

Detainees were beaten and their families were harassed, with some relatives also arrested as authorities sought “confessions”. At least three of the detainees have now been sentenced to death; prison terms ranged from one month to 10 years, as well as flogging.

Many detainees, including political prisoners, were held incommunicado for days, weeks, or months in undisclosed locations. Authorities refused to give information to families of victims or detainees, in some cases threatening the relatives with arrest.

Evidence for the “crimes”, beyond participation in protests, including political songs, filming the demonstrations or sharing videos on social media; attending memorial ceremonies and inviting members of the public to join them; and expressuons of sympathy for “martyrs”.

Iranian officials have accused detainees of arson and destruction of public property, but Amnesty found no presentation of credible evidence in any of the cases.

Victims spoke of “being hooded or blindfolded, punched, kicked, flogged, beaten with sticks, rubber hosepipes, batons and cables, suspended and/or forced into holding painful stress positions for prolonged periods, deprived of sufficient food and potable water, and placed in prolonged solitary confinement, sometimes for weeks or even months”.

Obtaining information from primary sources on interrogations, Amnesty also documents security and intelligence officers and prison officials stripping detainees and spraying them with cold water; subjecting them, including children, to extreme temperatures and/or bombardment of light or sound over a sustained period; forcible extraction of nails from fingers or toes; pepper spraying; forced administration of chemical substances and electric shocks; waterboarding; mock executions; and threats of rape of the detainee and their family members.spouses; and threats to rape detainees or their family members.

My interrogators tortured me in all sorts of ways….They told me, “If you die, it will be like a dog dying. It’s not important to us if you live or die.”

The pain was horrific. At one point, I was just wishing to die so that I would be free of the pain and torture. Human life is not important to them.