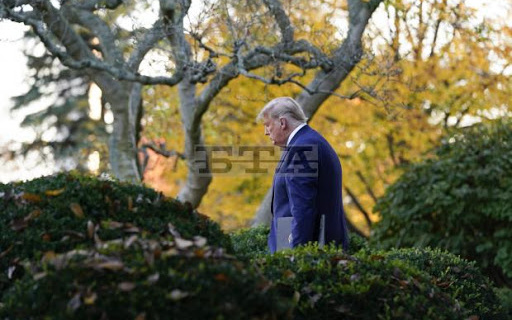 Donald Trump has just realized that he tweeted of an election “won” by Joe Biden.

He only won in the eyes of the FAKE NEWS MEDIA. I concede NOTHING! We have a long way to go. This was a RIGGED ELECTION!

Donald Trump has admitted his loss to President-election Joe Biden, albeit in a tweet filled with lies and disinformation:

He won because the Election was Rigged. NO VOTE WATCHERS OR OBSERVERS allowed, vote tabulated by a Radical Left privately owned company, Dominion, with a bad reputation & bum equipment that couldn’t even qualify for Texas (which I won by a lot!), the Fake & Silent Media, & more! https://t.co/Exb3C1mAPg

The tweet has at least four falsehoods: 1) There is no evidence of a “rigged” vote; 2) There were observers from both campaigns at polls in all 50 states and the District of Columbia; 3) There is no evidence of fraud in Dominion voting machines, which were only used in a small number of polling stations; 4) Dominion is not a “Radical Left” company.

Trump’s message came amidst a flurry of tweets and retweets, many from Fox TV even as he denounced the outlet as for “abysmal” daytime output. The outburst pointed to a Trump campaign for 2024 declaring that he is reclaiming what is rightfully his from the 2020 vote.

ORIGINAL ENTRY, NOV. 14: After a wobble during a White House appearance, Donald Trump clings to his fantasy that he, rather than President-elect Joe Biden, won the November 3 election.

Trump addressed an audience for the first time since November 5, speaking in the White House Rose Garden about “Operation Warp Speed” amid the Coronavirus pandemic. But repeating his rejection of measures to contain the virus, which has killed almost 250,000 Americans, he stumbled into a near-admission that he may have lost the vote: “Whatever happens in the future — who knows which Administration there will be, I guess time will tell”.

Trump seems to be on the cusp of saying "the Biden administration," but catches himself and says "time will tell" pic.twitter.com/6QaZV9TFOq

See also EA on Monocle 24: Will Trump Soon Give Way?

But back on the safety of his Twitter timeline, Trump railed until 1 a.m. that he had won, pushing disinformation and conspiracy theories through tweets and retweets — with Twitter flagging almost every message.

700,000 ballots were not allowed to be viewed in Philadelphia and Pittsburgh which means, based on our great Constitution, we win the State of Pennsylvania!

As the counting of every vote led to the final projections in the election — North Carolina for Trump; Georgia for Biden, giving him 306 electoral votes, the exact total Trump won in his claimed “landslide” in 2016 — Trump circulated the message from Fox TV’s Pete Hegseth, “We need every vote counted, and ferociously.”

No Trump Path Through the Courts

Friday was distinguished by a series of legal setbacks for the Trump team, with courts in Pennsylvania, Michigan, and Arizona dismissing cases.

The Trump camp is hoping that a court in one of the key swing states will allow an appeal through State and then Federal level, reaching the Supreme Court with three of its nine justices — including Amy Coney Barrett, rushed through a pre-election confirmation to give Trump some protection if he lost — appointed by the Administration.

But judges quickly tossed out the litigation, citing a lack of evidence. A state judge in Detroit rejected an attempt to halt the certification of the vote in the city’s Wayne County pending an audit.

The dismissal by Judge Timothy Kenny blocked any Trump attempt to take the matter to Michigan’s legislature, hoping a Republican majority would seat his electors rather than Biden’s.

Sixteen federal prosecutors, assigned to monitor the election, wrote in a letter to Attorney General William Barr that there was no evidence of substantial irregularities. The summary challenged Barr’s order, defying Justice Department policy, of an inquiry into voting before states certified results.

The prosecutors asked Barr to rescind his memorandum, saying that it “is not based in fact” and that “the timing of the memorandum’s release thrusts career prosecutors into partisan politics”.

The signatories noted, “It was developed and announced without consulting nonpartisan career professionals in the field and at the Department.”

The letter echoed Thursday’s comprehensive finding of the Department of Homeland Security, hours after Trump tweets “2.7 MILLION VOTES DELETED”, of the “most secure [election] in American history”.

Lawyers from the Ohio-based law firm Porter Wright Morris & Arthur abruptly withdrew from the federal lawsuit they filed for Trump in Pennsylvania. The firm’s attorneys were concerned that Porter Wright was being used to undermine the integrity of the electoral process.

Langhofer said there were not enough ballots at stake to overturn Biden’s lead of more than 10,000 votes. He had already contradicted Trump on Thursday by saying that any effect on the count was “good-faith errors” and not fraud: “We are are not saying anyone is trying to steal the election.”

And the Trump campaign’s greatest hope, overturning Biden’s 63,005-vote lead in Pennsylvania, was buried by the US Court of Appeals for the Third Circuit in Philadelphia.

The Trump camp hoped that the court would block the counting of ballots between Election Day and November 6. A Pennsylvania Supreme Court had mandated the count, overruling an order from the Republican-controlled legislature.

The US Court of Appeals upheld the extension. And two other courts in Pennsylvania denied the Trump campaign’s request to invalidate six batches of mail-in ballots, totaling 8,927 votes.

The Trump campaign still has cases pending in Michigan and Pennsylvania, and filed another in Wisconsin on Thursday.