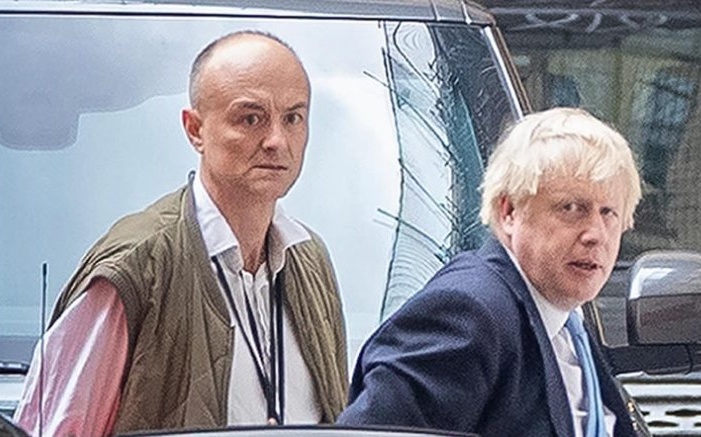 The former Tory grandee Michael Heseltine said in 2018, when asked about current UK Prime Minister Boris Johnson: [He is] a man who waits to see which way the crowd is running and then dashes in front and says ‘Follow Me’.”

This has been Johnson’s playbook throughout his political life, whether as London Mayor embracing the policies of Prime Minister David Cameron, as a campaigner for Brexit, or in his reliance on the Vote Leave team and tactics to propel him into 10 Downing Street.

So when Boris Johnson told his chief advisor Dominic Cummings, the guru of Vote Leave, to leave Downing Street with immediate effect on Friday evening….

I don’t think this is due to a massive breakdown in trust between the Prime Minister and his right-hand manipulator. No, it is is because Cummings and his brand of politics are not going to help Johnson in a new era, ushered in by the meltdown of Government management of Coronavirus and by the cliff edge of No Deal Brexit.

Cummings and his Vote Leave ally Lee Cain, the head of communications who left Downing Street last week, are both ardent Brexiters who revelled in a macho culture of bullying and underhand tactics. They dealt in tough messages and the sidelining or sacking of ministers and officials who stood in their way.

The self-proclaimed Brexit Bullies made many enemies around Downing Street and Parliament. But they had the tacit approval of Boris Johnson if it enabled his number one goal – the political ascendancy of Boris Johnson.

This is a man whose multiple affairs ended his 25-year marriage to Marina Wheeler. He announced his engagement to Carrie Symonds, a Tory communications advisor, and the imminent birth of their baby only days after Wheeler, recovering from cancer, was mourning the loss of her mother. . Lara Johnson branded her father a “selfish bastard”.

Johnson worked with Cummings to advise the Queen that Parliament should be prorogued for five weeks at the height of the Brexit crisis, a tactic ruled illegal by the Supreme Court. They sabotaged Chancellor of the Exchequer Sajid Javid, prompted his resignation. They oversaw the disastrous handling of Coronavirus, often with miscommunication. When Cummings broke laws as well as medical guidance with a dash to northeast England in April, Johnson spent much of his political capital defending his advisor and refusing to cut him loose.

But events in the US, with a President-elect Joe Biden, indicate the time of macho-man politics, lies, and disinformation may be coming to an end. The success of a leader like New Zealand’s Jacinda Ardern, with a politics of compassion, progressive ideas, compromise, and dialogue, could spell the end of the Trumps, Johnsons, Bolsonaros, and Erdoğans of the world.

Johnson felt the shift in the political breeze. So as he congratulated Joe Biden and called Donald Trump the ‘previous President’ in a Parliamentary statement, his team briefed journalists that a “full reset was now needed to get a handle on the government operation”, less than a year after Johnson won a commanding majority in the General Election.

A Moment Before the Reckoning

Sources close to Johnson’s new press secretary Allegra Stratton claimed the departure of Cummings and Cain would establish that full reset of direction and deal with a chaotic communications strategy.

Stratton, a former TV journalist and Treasury advisor, and Johnson’s wife Symonds have been pressed for a more conciliatory approach. But the divorce from Cummings is the work of an opportunist Prime Minister. Johnson remade himself from pro-European to Brexit poster boy; from the middle-of-the-road Mayor of London to a right-wing operator ready to condemn Parliament, the Courts and the BBC to the Tower of London; from a leader of a multi-cultural city employing racist comments, some far from subtle, to stoke cultural clashes for his national ambitions.

Now the opportunist faces the reckoning of policy rather than communication. Does he risk hard-right connections and pursue a last-minute Brexit deal with the European Union before the December 31 deadline, hoping the shift will foster a trade deal with a Biden Administration? Does he convert a feel-good declaration over the tackling of climate change into substantive measures? Having dismissed Dom, does he tie himself to Joe over China policy, the Iran nuclear deal, and other initiatives?

For now, the chatter about the “Brexit Bullies”, their demeaning of Symonds as “Princess Nut Nuts”, and the grumblings of Conservative MPs will hold headlines and give Johnson a brief moment to choose. Right now, his finger is aloft in the political wind to see which way it is blowing.