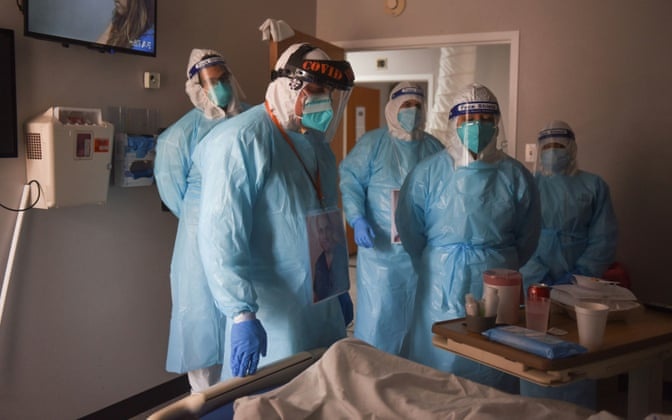 Donald Trump, who dismissed the surge on Friday as the outcome of “more testing”, ignored the crisis on Saturday. His motorcade from the White House diverted to view supporters, gathered in protest at Trump’s loss to President-elect Joe Biden, and then took Trump to his golf course in Virginia.

“I don’t know that I think that’s where his focus is,” said a “senior administration official”. “But I know that’s where our focus needs to get back to.”

Communities from Wisconsin to Texas are using mobile morgue units, with medical systems at breaking point. Hospitalizations are also at record levels.

Doug Bergum of North Dakota, a Republican who had resisted measures for months, reversed course and ordered the wearing of masks and limits on gatherings. North Dakota is one of 16 states which posted daily case records on Friday, and 30 who set weekly high marks.

In a somber video message, Burgum said, “Our situation has changed, and we must change with it.”

Mark Gordon of Wyoming said overrun hospitals have set up tents, with patients from overcrowded facilities in South Dakota sent into the state. He noted rampant misinformation about the virus with people acting like “knuckleheads”:

We’ve relied on people to be responsible and they’re being irresponsible. If I can’t rely on you, we’re going to have to do something else.

The responses from State leaders contrasted with that of Trump, who has ignored his medical and public health advisors.

A “senior administration official” said Deborah Birx, the coordinator of the White House Coronavirus Task Force has repeatedly proposed the reduction of in-person dining in restaurants and bars, but Trump has dismissed her. Trump has also ignored the recommendations of Dr. Anthony Fauci, the Government’s top Coronavirus specialist, for firm messages about the importance of wearing masks.

A senior official said Trump is no longer regularly briefed on the pandemic. Birx, Fauci and Surgeon General Jerome Adams have infrequently visited the White House in recent weeks.