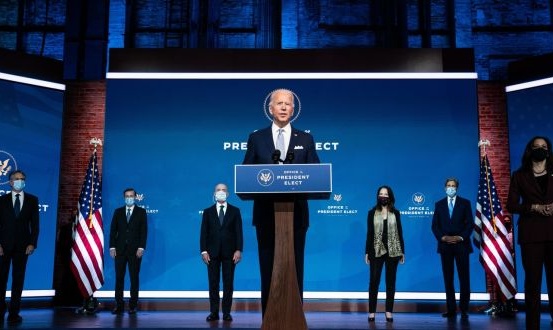 Joe Biden declares, “America is Back”, as his top officials talk of a new way forward in foreign policy and national security.

See also EA on BBC and The Daily Show: Biden’s Officials — “The Adults Are Back In the Room” — as Trump Fumes
Biden Names Foreign Policy Team as Trump Gives Way on Transition

Biden and the incoming officials spoke of a constructve foreign policy re-engaging with the world, in contrast with the unpredictable, ego-first approach of Donald Trump.

Sullivan explained that Biden had tasked the officials to “reimagine national security” to include “the pandemic, the economic crisis, the climate crisis, technological disruptions, threats to democracy, racial injustice and inequality in all forms”.

Haines, a former Deputy Director of the CIA, held up the intelligence officials derided by Trump as part of a “Deep State” trying to undermine him: “I will represent to you, Congress, and the American public the patriots who comprise our intelligence community. I will never shy away from speaking truth to power.”

Thomas-Greenfield, a native of Louisiana and former Assistant Secretary of State for Africa, set out the approach to diplomacy:

In my thirty-five years in the Foreign Service across the world, I put a Cajun spin on it. I call it Gumbo diplomacy.

Wherever I was posted, I’d invite people of all walks then make homemade gumbo. Thats how you break down barriers, connect, and see each-other as humans. pic.twitter.com/Au1Qd7Yczq

And Blinken told the story of his ancestors, including survivors of the Russian pogroms and the Holocaust, to illustrate that “for my family, as for so many generations of Americans, America has literally been the last best hope on earth….Now we must proceed with humility and confidence.”

"My late stepfather, Samuel, he was 1 of 900 children in his school in Białystok, Poland, but the only one to survive the Holocaust after four years in concentration camps … that is what America represents to the world." — Blinken pic.twitter.com/AYSjQwFGSF

Kerry, speaking of the new Cabinet-level post to deal with climate, said a return to the Paris Accords — from which the Trump Administration withdrew — “is not enough”: “[We are] determined to seize the future now and leave a healing planet to future generations.”

In a TV interview on Tuesday night, Biden said the approach was not just a rerun of the Obama Administration, in which he served as Vice President — “This is not a third Obama term” — as he emphasized, “President Trump has changed the landscape. It’s become America first, it’s been America alone.”

The incoming officials have cited shortcomings during the Obama years, such as the failure to protect Syria’s civilians from mass killing by the Assad regime after the March 2011 uprising.

See also Syria Special: Obama’s Legacy Will Be Forever Tarnished by His Inaction

Blinken, who was Deputy Secretary of State and Deputy National Security Advisor, said in May:

Any of us, and I start with myself, who had any responsibility for our Syria policy in the last administration has to acknowledge that we failed.

We failed to prevent a horrific loss of life. It is something I will take with me for the rest of my days.

The officials have acknowledged the failure to recognize the scope of Russia’s interference in the 2016 US Presidential election until it was too late to act, and a slow response to the economic and political actions of China.

On Tuesday, the team looked forward to dealing with those issues as well as repairing the damage of Trump’s inner circle.

Mayorkas spoke of his parents, Jewish émigrés who fled Cuba in 1960 when he was baby. He indicated that Homeland Security, in contrast to Trump’s pursuit of the Wall with Mexico and bans on immigrants, is meant to “keep us safe and to advance our proud history as a country of welcome”.

Transition Begins, Including Intelligence and a Covid-19 Vaccine

Biden said in his Tuesday night interview that he will soon receive the Presidential Daily Briefs with vital intelligence on international developments, and that — with Trump’s grudging retreat over the transition — his staff are already meeting agency personnel to distribute mass distribution of a Coronavirus vaccine.

“There’s a lot of immediate discussion, and I must say, the outreach has been sincere,” he said. “It has not been begrudging so far. And I don’t expect it to be.”

Health Secretary Alex Azar confirmed that his staff are now coordinating with the Biden team over vaccine distribution “in the best spirit of looking out for the health and well-being of the American people”.

Biden’s victory was further consolidated on Tuesday by the certification of results in Pennsylvania and Nevada, both vital to his 306-232 Electoral College margin over Trump.

The certifications were confirmed after the failure of lawsuits by attorneys for Trump and his allies, who have lost 37 of 38 cases so far.

However, in a last-ditch attempt, lawyers for the Trump campaign have asked the US 3rd Circuit Court to halt the “effect” of Pennsylvania’s results. State officials asked the court to reject the appeal.

Buoyed by news of the transition and of successful trials for a Covid-19 vaccine, the Dow Jones average broke 30,000.

Trump hastily called for reporters to assemble at the White House, so he could seize credit in an appearance lasting 1 minute, 48 seconds.