EA on BBC and The Daily Show: Biden’s Officials — “The Adults Are Back In the Room” — as Trump Fumes 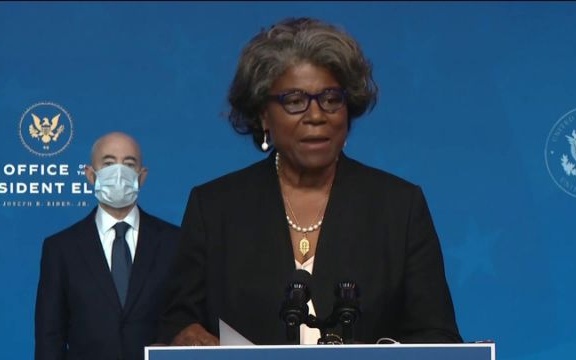 Incoming US Ambassador to the UN, Linda Thomas-Greenfield, speaks at a press conference of Biden Administration officials, Wilmington, Delaware, November 24, 2020

I spoke on Tuesday, with BBC TV and radio outlets and with The Daily Show podcast, about President-elect Joe Biden’s national security and foreign policy team, as Donald Trump continues to throw disinformation at the US elections.

Listen to BBC Radio Scotland from 13:05

The conversation focuses on Trump’s resistance to his loss despite “having no options other than disinformation and Twitter”.

Trump’s play, which was to get one of the lawsuits to the Supreme Court and have the justices cover him and overturn the election, is evaporating.

But Trump can issue a set of executive orders threatening the “Dreamers” immigrants, pushing back ObamaCare, stripping environmental regulations, and making it more difficult for legal immigrants to receive benefits.

The discussion considers the effect of Trump’s obstruction on management of Coronavirus, with almost 260,000 Americans killed so far, and the Biden team’s effort to launch planning: “They want to hit the ground running on January 20. There is no time to be lost.”

So with more than 73 million Americans voting for Trump, how can Biden and his team reach out to make progress not only on the pandemic but on other issues?

Listen to The Daily Show Podcast

So will Trump announce that he will reverse the “stolen election” with the announcement of a run for President in 2024?