TrumpWatch, Day 1,375: Trump’s Chief of Staff — “We’re Not Going to Control The Pandemic” 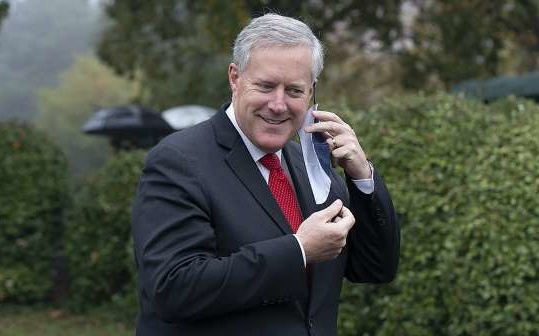 Meadows (pictured) made the statement in a TV interview several hours after confirmation that at least five staff of Vice President Mike Pence have tested positive for the virus. More than 30 Administration and Republican figures, including Donald and Melania Trump, have been infected since a White House “super-spreader” event on September 26 for Supreme Court nominee Amy Comey Barrett.

Among the infected Pence staff is his personal aide Zach Bauer, who is in close contact with the Vice President throughout the day. But Pence refused to suspend his public appearances on Sunday, with a campaign stop in North Carolina.

Meadows asserted to CNN’s Jake Tapper, “We are gonna control the fact that we get vaccines, therapeutics and other mitigations.”

Tapper asked, “Why aren’t we going to get control of the pandemic?”

The Chief of Staff replied, “Because it is a contagious virus just like the flu.”

The statement came as the US death toll reached 225,229. Confirmed cases, with the highest daily increases so far in the pandemic, are 8,635,966.

A Million Deaths by February 28?

Pursuit of “herd immunity” lets Coronavirus spread unchecked. Advocates assert that the acquired immunity among most of the population will produce a situation where the virus can no longer proliferate.

Up to now, the concept has applied to mass vaccination, not uncontrolled spread of infections. Almost all medical and public health experts warn that the approach would lead to widespread fatalties. In March, during the first wave of the pandemic, the US Government’s top scientists estimated that 2.2 million Americans would be killed if there were no containment spreads.

Last week the University of Washington’s Institute for Health Metrics and Evaluation, one of the leading modellers of the pandemic, projected 511,000 deaths by February 1 under current conditions. The scientists added that, if measures are lifted, the toll will be more than a million by February 28.

But Dr. Scott Atlas, a neuroradiologist and Fox TV commentator who is now Donald Trump’s medical confidante, is a loud advocate of herd immunity. He tweets several times each day with derision of epidemiologists who advocate containment, including a barely-coherent attack at the same time that Meadows was making his statement:

This summer, while insisting of full “reopening” and rejecting measures such as wearing of masks, Trump and Atlas denied this was pursuit of herd immunity. But two weeks ago White House officials, in a conference call to reporters, embraced the concept.

[This is] an acknowledgment of what President Trump’s strategy has clearly been from the beginning of this crisis: to wave the white flag of defeat and hope that by ignoring it, the virus would simply go away. It hasn’t, and it won’t.

It’s sadly no surprise then that this virus continues to rage unchecked across the country and even in the White House itself.

Biden’s running mate Kamala Harris, campaigning in Michigan, said Meadows’ remark were “admitting defeat”: “This is the greatest failure of any Presidential Administration in the history of America….This Administration failed to take personal responsibility or responsibility in leading the nation through this dangerous, mass-casualty event.”

The Government’s top infectious disease expert, Dr. Anthony Fauci, said again on Sunday that it is time to consider a national mask mandate.

It would be optimal if this could be accomplished without resorting to a mask mandate. However, if the situation continues to deteriorate regarding numbers of cases, hospitalizations and likely deaths while many people still refuse to wear masks, we should seriously consider mask mandates.