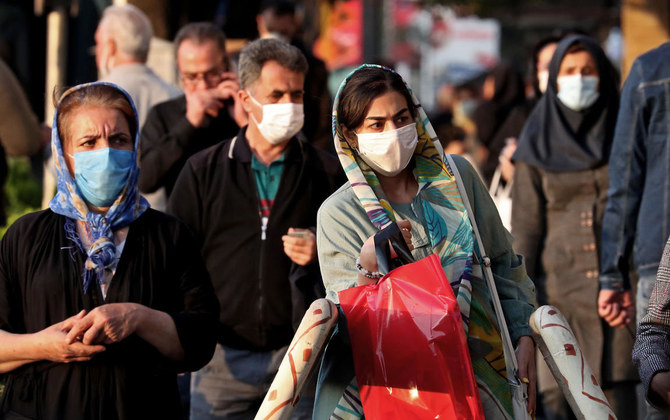 Iran’s daily record for Coronavirus cases has risen to 6,191.

The Health Ministry announced the figure on Sunday, taking the official total to 568,896.

Iran’s daily cases have surged by 55% since October 6, when the 4,000 level was broken for the first time.

The Ministry reported 296 deaths yesterday, raising the total to 32,616.

President Rouhani told the National Coronavirus Task Force on Sunday, “Currently, there is no way to fight this virus other than observing health protocols.”

He tried to divert blame to others about the “European-mutated wvirus, [whose] transmission rate and power of which has increased ninefold”, and then asserted:

It became clear to us how important it is for us to rely on our inner strength and facilities and not to rely on others. We realised that in the days, we should stand on our own two feet because others, even in matters of human rights, healthcare and the saving human lives, do not help despite what they chant.

Rouhani complained that some Iranians were not “taking legal advice seriously”.

Iran has recorded more than 6,000 daily Coronavirus cases for the first time.

The Health Ministry announced 6,134 cases on Friday, bringing the official total to 556,891.

There are 4,933 patients in critical condition, another record.

Coronavirus cases and deaths in Iran have soared to new daily records, as President Hassan Rouhani admits, “We are in a very difficult situation.”

The Health Ministry reported 5,616 cases on Wednesday, bringing the official total to 545,286.

The Ministry declared 312 deaths yesterday, two days after a record-setting 337. Only a week ago, the new record was 279.

Rouhani, who declared in June that Iran had successfully contained the virus, struck a far different tone yesterday.

He wrote, after receiving a report by the Health Minister: “The rocky path to the summit is a difficult and the burden is very heavy. There is no choice but patience, self-sacrifice, devotion and prudence.”

The Government had held out for months against reimposing restrictions from the first wave during the spring.

But last week Rouhani announced a mask mandate, beginning in Tehran and extending to other cities. Tehran authorities shut schools, mosques, and other public places from October 3, initially for a week but now indefinitely.