How English Footballer Marcus Rashford Exposed the Nastiness of Austerity — But What Must Be Done Now? 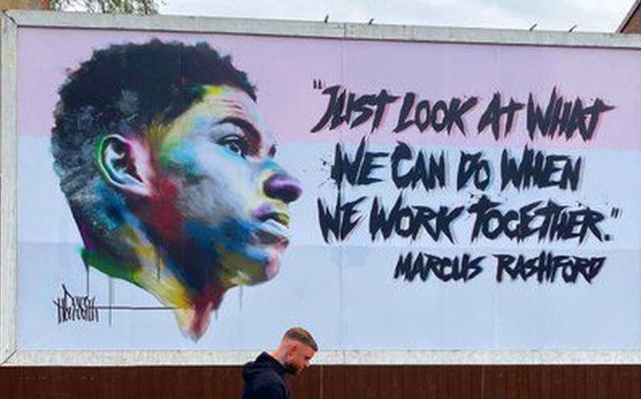 “Can Manchester United score? They always score” — the footballing words in which every United fan revels. They epitomize the Never Give Up mentality of the club and of the players who have come through its ranks, like the striker Marcus Rashford.

So it was no surprise that, a day after the UK Government and 321 of its MPs voted to reject a motion to extend free school meals during the holiday period until Easter 2021, Rashford did not concede but cranked up the campaign.

In June, Rashford wrote an open letter to the Government, urging it to reverse its decision not to provide free school meal vouchers to 1.3 million children during the summer, saying that “the system isn’t built for families like mine to succeed”.

The footballer won universal acclaim. He was awarded an MBE by the Queen. But he did not rest on his success. Instead, he sough an increase in the value of Healthy Start fresh fruit and vegetable vouchers for pregnant women on low incomes, and an expansion of charity-led holiday hunger schemes.

Now we have Round 2 after the Government’s blunt rejection of a repetition of the summer holiday scheme.

Rallying for the Children

Blown away by news of local businesses stepping up to fill the voucher scheme deficit during the October half term. Selflessness, kindness, togetherness, this is the England I know 🏴󠁧󠁢󠁥󠁮󠁧󠁿

Add #ENDCHILDFOODPOVERTY to your tweets so I can track them. I will share as many as I can ♥️

From Stevenage to Liverpool and Shrewsbury to Cumbria, volunteers stepped up. Rashford, true to his word, shared examples of the generosity. Journalist Jack Blanchard quipped:

Marcus Rashford appears to have set up an alternative government pic.twitter.com/cuJd9t20tK

Tory MPs and some of their mouthpieces, like Tom Harwood of the Guido Fawkes site, accused Rashford of being a celebrity acting out of vanity and “virtue-signalling”. The footballer kept his head and focused on the task at the task at hand. His petition calling on the Government to act has gathered more than 750,000 signatures, as scores of councils such as Birmingham, Wolverhampton, and Conservative-controlled Kensington and Chelsea pledged to provide the holiday meals.

I’m signing off with a feeling a pride tonight. The superstars of this nation lie in local communities. Even after taking the biggest hits you have wrapped your arms around your community to catch children as they fell. I really can’t thank you enough, you’re amazing ♥️

Acting — and Challenging — Where Government Fails

This campaign is not just about free school meals for 1.3 million children. It is about feeding hungry children because a national government refused to do so. It is about dealing with a symptom of 10 years of austerity, a symptom alongside stagnant wages, lack of opportunities, cuts to services, an erosion of developmental and lifelong learning, and the widened gulf between the haves and the have nots.

Across the UK, 4.2 million children live in relative poverty, and 2.4 million in absolute poverty. My city, Birmingham, has 61,000 children in poverty. In my hometown of Walsall, 31,000 children — 41% of the town’s total — are impoverished. Yet the leader of Walsall’s Tory council brusquely e-mailed, “We will not be joining Birmingham and Wolverhampton” in provision of meals.

Marcus Rashford, progressive political figures, benevolent business owners, and people like ourselves help fill the gap. But we need to ask ourselves why a Government that has subsidized “Eat Out to Help Out” with about £522 million finds £20 million for holiday meals a huge ask. We need to challenge MPs who voted against the Parliamentary motion because it would “create dependencies” — 72% of children who could be living in poverty are in working households.

My sister and I are products of a free school meal system. My parents were working but, like many families, we lived through financial difficulties. The system helped my parents get a breather and it ensured that we had an education. Now 30 years later, like millions of people who benefited from free school meals, my sister and I are putting something back into the system.

Poverty is not the fault of the child. Nor are the problems associated with poverty: the inability to concentrate in the classroom, weakened immune systems, and long-term health, social, and economic consequences.

We should support and join the great efforts of Marcus Rashford, but let’s not give the purveyors of these policies — these politicians who have neglected the future of our nation — an easy ride.

Prime Minister Boris Johnson, who has been known for many U-turns, may turn again and provide food vouchers for Christmas. But the damage is done: this Government does not understand — or care to understand — poverty and the causes of poverty.

The campaign to highlight and end this neglect and failure will be even tougher than the one that Marcus Rashford is waging.