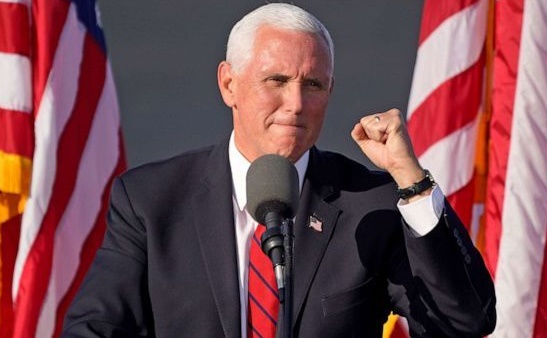 Mike Pence at a rally in Lakeland, Florida amid confirmation that several aides are infected with Coronavirus, October 24, 2020

At his drive-in rally near Philadelphia on Sunday, Democratic Presidential candidate Joe Biden challenged Donald Trump’s denial of the Coronavirus threat: “You’re asking us to learn how to die with it, and it’s wrong.”

Echoing the assessment of medical and public health experts, Biden warned that it is “going to be a dark winter ahead unless we change our ways”.

He said at the community college in Bucks County, Pennsylvania:

I wish I could go car to car and meet you all. I don’t like the idea of all this distance, but it’s necessary. I appreciate you being safe. What we don’t want to do is become superspreaders.

In North Carolina, Trump scoffed, “People in cars. I don’t get it. You heard a couple of horns. Honk, honk. It’s the weirdest thing.”

With Coronavirus surging and the prospect of more than 500,000 deaths by February 1, Dr. Anthony Fauci has shifted his position to suggest a national mask mandate.

Fauci, the head of the National Institute of Allergy and Infectious Diseases, has put his faith in voluntary adherence, “I have trust in the American people that if we put a strong emphasis on the importance of wearing masks, that we will come around and do that.”

He said at a September 15 news conference, “A national mandate probably would not work.”

But Fauci — sidelined by Donald Trump since May and insulted by Trump as a “disaster” last week — told CNN on Friday:

Well, if people are not wearing masks, then maybe we should be mandating it….

There’s going to be a difficulty enforcing it, but if everyone agrees that this is something that’s important and they mandate it and everybody pulls together and says, you know, we’re going to mandate it but let’s just do it, I think that would be a great idea to have everybody do it uniformly.

Fauci explained that the voluntary approach was not working: “[Mask wearing] sounds very simple. But we’re not uniformly doing that and that’s one of the reasons we’re seeing these surges.”

At his rally in Wisconsin on Saturday night, Donald Trump played down the threat of Coronavirus by accusing medical staff of putting in Covid-19 as a false cause of death.

DISGUSTING—Trump tells his MAGA audience that frontline healthcare workers are claiming false #COVID19 diagnoses to profit from it. This is beyond pale. It’s a well known right wing conspiracy theory. PUSH back—1600-1700 HCW have died. pic.twitter.com/1o7u9DmWws

Among the infected are at least four members of his staff, including Chief of Staff Marc Short.

While “Vice President Pence is considered a close contact with Mr. Short”, O’Malley said Pence would “maintain his schedule” after consultation with the White House Medical Unit.

There was no statement from the Medical Unit, and “two people briefed on the matter” said White House Chief of Staff Mark Meadows tried to keep news of the outbreak from the public.

Pence spokesman O’Malley did not respond to a question about others who are infected.

More than two dozen high-profile Administration and Republican figures, including Donald and Melania Trump, were confirmed positive soon after a “super-spreader” event — the ceremony for Supreme Court nominee Amy Coney Barrett — at the White House on September 26.

Donald Trump was taken to Walter Reed Military Hospital six days later by emergency medical evacuation after receiving oxygen treatment. He was hospitalized for three days on a combination of experimental antibodies, the antiviral Remdesivir, and steroids before insisting on his discharge.

Trump and Pence have both persisted with rallies where there is no social distancing and many of the attendees do not wear masks.

On Saturday, Pence spoke at a gathering at Lakeland, Florida.

Despite the record daily increases in cases, Trump is insisting that the US has “rounded the corner” on the pandemic.