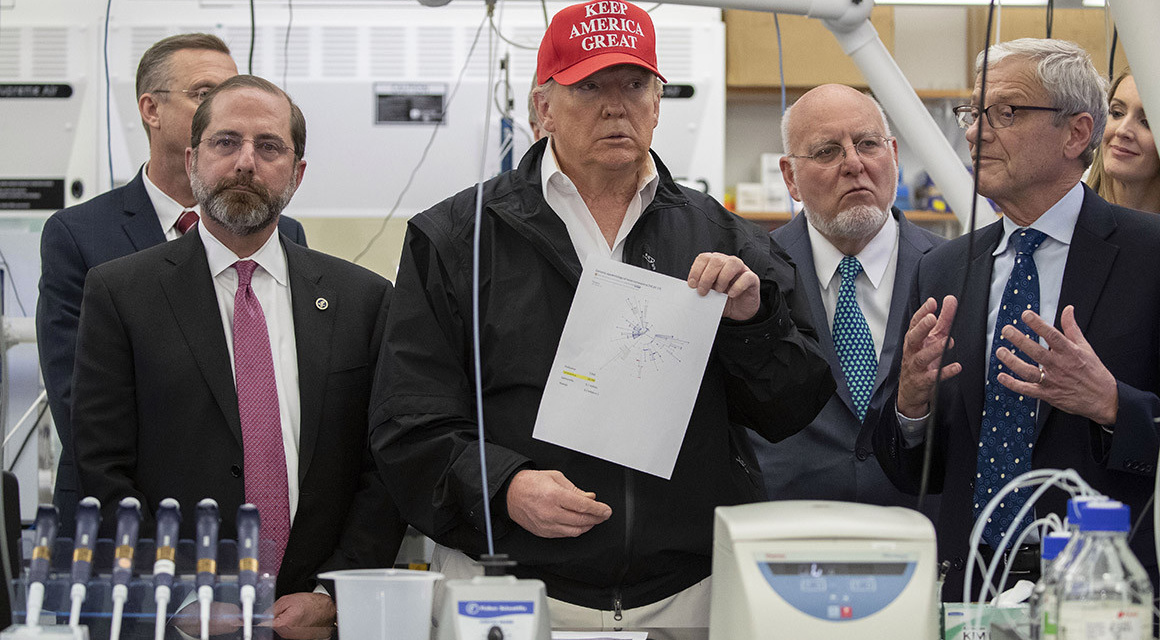 More than 1,000 current and former staff of the Centers for Disease Controls and Prevention have signed an open letter criticizing the Trump Administration’s response to the Coroanvirus pandemic.

“The absence of national leadership on Covid-19 is unprecedented and dangerous. CDC should be at the forefront of a successful response to this global public health emergency,” they write.

ORIGINAL ENTRY: Amidst a Coronavirus pandemic which has killed almost 220,000 Americans, the Trump Administration’s intimidation has rendered the Centers for Disease Control and Prevention ineffective.

For months, Donald Trump’s political appointees have buried or altered CDC guidance, replacing public health with Trump’s denial of the threat and his insistence on full “reopening” of businesses, schools, and universities.

Trump officials — and Trump himself — have publicly undermined CDC head Robert Redfield by scoffing at his assessments, including on containment measures such as masks and on vaccines, as “mistaken”.

Now ProPublica documents the extent of the pressure and intimidation, using hundreds of e-mail and Government documents and more than 30 interviews with those involved.

Friday’s increase of 69,511 cases is the highest since July. More than 40 states have a rising rate of infections.

Intervening Over Churches and Choir Singing

In late May, the CDC was verifying “super-spreader” events in public places such as an Arkansas church where 52 of 61 singers at a choir practice contracted Coronavirus. Two died.

A CDC team under Dr. Jay Butler, an infectious diseases expert with more than 30 years of experience, sought to complete a guidance for churches, synagogues and mosques. The advice had been put aside by Trump’s staff in April as they objected to the CDC’s language.

But Trump aides and finally the office of Vice President Mike Pence demanded edits to the guidance, based on the latest scientific findings. They asked, “Why is it not up?”, and said CDC failure to accept the White House text would be insubordination.

Fifteen minutes after the call from the Vice President’s office, the CDC version was replaced. There was no mention that the virus can be spread by choir singing.

No “Hill to Die On” v. White House

Senior CDC staff spoke of losing battles over protection of lives and science. They referred to a “hill to die on” over the White House interference, only to give way and accept the White House demands.

The scientists expressed fear that if they quit or spoke out over the intimidation, the Administration would stop all consultation with the CDC and pursue even more dangerous policies.

Agency officials lost faith in Redfield, a Trump appointee at the CDC only since 2018, as The CDC head signed Administration orders that officials had refused to endorse.

Globally-prominent specialists were marginalized, silenced, or reassigned. One scientist summarized:

[The Administration is] appropriating a public enterprise and making it into an agent of propaganda for a political regime. It’s mind-boggling in the totality of ambition to so deeply undermine what’s so vitally important to the public.

A spokesperson for the Department of Health and Human Services maintained, “Under President Trump, HHS has always provided public health information based on sound science. Throughout the COVID-19 response, science and data have driven the decisions at HHS.

But CDC scientists see a shattering of public trust as the pandemic continues to take about 900 lives each day in the US.

“Most of us who saw this could be retired or dead by the time [this] is fully fixed,” one said.

Biden Calls for Responsibility and Unity

Speaking in Michigan about US healthcare, Democratic Presidential candidate Joe Biden criticized Trump for repeatedly declaring that the US is “rounding the turn” in the pandemic.

“He’s gone around the bend. It’s not disappearing. In fact, it’s on the rise again. It’s getting worse, as predicted.

He called for unity amid the crisis:

If we can’t unite the country, we’re in trouble….

Bring the country together, that’s the job of a President. We can be so much better than what we’ve seen.

In his campaign stops in Florida and Georgia, Trump was primarily concerned with insults of Biden and NBC News reporter Savannah Guthrie, who hosted Trump’s Town Hall meeting on Thursday.

He called the Democratic candidate the head of “a crime family”, said 2016 Democratic nominee Hillary Clinton should be in prison, and snapped at Guthrie:

"I had somebody going totally crazy last night" — Trump on Savannah Guthrie's performance during the NBC town hall pic.twitter.com/s6zTHfjbqi

Under the guise of “Protecting America’s Seniors”, Trump declared that the positive test of his 14-year-old son Barron showed there is no threat:

“Children should go to school. My young son Barron had it. And he had it. And all of a sudden he doesn’t have it. It’s like, you know, it’s different.

He then implicitly attacked the CDC and other Government scientists, “We cannot allow unscientific, panic-driven, fear-based policies to deny our children and grandchildren their future and their dreams.”