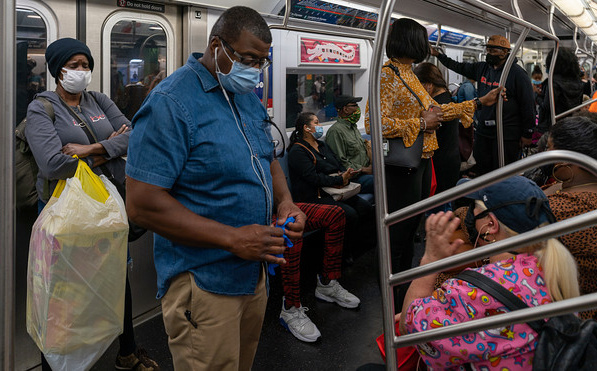 The Trump Administration has blocked the Centers for Disease Control and Prevention from requiring masks on public transport to restrict Coronavirus.

The CDC order, drafted last month, would have commanded passengers and employees to wear face coverings on airplanes, trains, buses, and subways and in airports, stations, and depots.

“Two federal health officials” said the White House intervened to prevent the CDC from acting under its “quarantine powers”, even though Health Secretary Alex Azar favored the mandate.

A task force official, who asked not to be identified, said the decision should be left to states and local authorities:

The approach the task force has taken with any mask mandate is, the response in New York City is different than Montana or Tuscaloosa, Alabama.

Local and state authorities need to determine the best approach for their responsive effort depending on how the Coronavirus is impacting their area.

Medical and public health officials have said that wearing masks is an effective step to contain the virus, especially in crowded, poorly ventilated public places. CDC Director Robert Redfield testified to Congress last month that the protection will be vital in checking an expected surge of the virus this winter: “I think masks are the most powerful weapon we have to confront Covid and we all need to embrace masks and set the example for each other.”

But Trump appointees have buried or altered CDC guidance. Officials blocked CDC regulations on schools and churches this summer. Health and Human Service spokesman Michael Caputo and his deputy Paul Alexander blocked reports and inserted Trump’s political lines such as “the importance of reopening”.

Last month, after Caputo took medical leave following a Facebook rant declaring that scientists are part of an anti-Trump “Deep State”, the CDC reversed misleading guidance from the Trump appointees. The misinformation including advice that asymptomatic people should not be tested, even if they had been exposed to the virus.

But Donald Trump has refused to wear a mask in public, including at his crowded rallies. On Monday night, after leaving Walter Reed Medical Hospital, an infected Trump whipped off his surgical mask as he stood on the White House balcony.

Pence and Dr. Scott Atlas, the neuroradiologist and Fox TV commentator adopted by Trump as his chief medical confidante, both oppose the mask mandate.

The coronavirus task force also intervened in late September to overrule Redfield’s order to keep cruise ships docked until mid-February. The order was opposed by the tourism industry in Florida, a key swing state in the Presidential election.