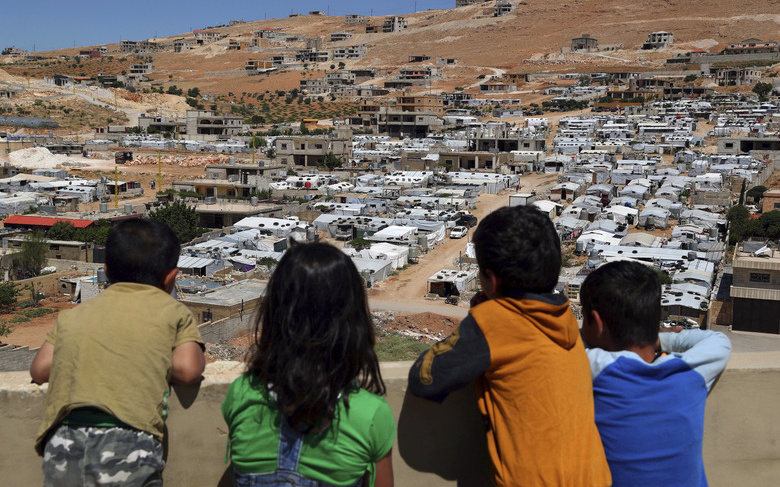 Lebanese children look from the rooftop of their home at a Syrian refugee camp in Arsal in eastern Lebanon, June 16, 2019 (Bilal Hussein/AP)

The Assad regime is hindering the return of refugees from Lebanon to Syria, demanding that each exchange $100 for Syrian pounds at the official rate.

The regime is in a currency crisis, with the Syrian pound losing more than 75% of its value in a year. It is now about 2,300:1 v. the US dollar on the black market, having stood at about 500:1 last autumn.

With the official exchange at 512:1, the regime is able to turn an effective profit of almost 80% on the $100 handed over by each refugee, as well as collecting desperately-needed foreign currency.

The regime imposed the $100 requirement in July, soon after the appointment of Prime Minister Hussein Arnous, an engineer, and emergency meetings of the “economic team”. The regime has also threatened long prison sentences for black market trading and transfer of large amounts of money out of the country.

One Syrian man, a day laborer in Lebanon, said he was unable to return after losing his job — $100 for each of his relatives was unaffordable, given that he only earned $150/month before the collapse of the Lebanon currency in a banking crisis.

Another refugee said he was able to send his family back to Syria, but had to remain in Lebanon and move into a house with others to save on rent.

Other refugees told Human Rights Watch that they are borrowing from relatives, but some are stranded between the Syrian and Lebanese borders when they are unable to raise the money.

Early this month, a 17-year-old Syrian girl, Zainab Mohammed al-Ibrahim, died after she was trapped at the border for two months.

Our orders are to send anyone who doesn’t have $100 back to where they came from, but the Lebanese side does not accept the return of Syrians.

Therefore, those Syrians who do not have the required amount have only one option, and that is to call their friends or family to bring $100 for the exchange, in order for them to enter Syria.