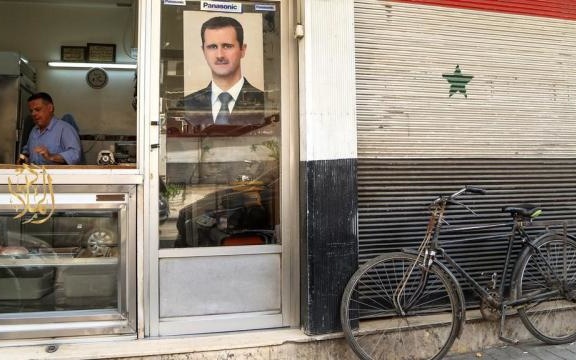 The Assad regime has announced that its “economic team” has met to discuss the country’s crisis and a collapsing currency.

State outlet SANA said Prime Minister Hussein Arnous, an engineer appointed by Bashar al-Assad on Thursday, led the discussion about the “steps and procedures of the Central Bank of Syria to restore the exchange rate to its state before the recent unjustified fluctuations”.

The collapse has been fed by regime corruption, a feud between the regime and Bashar al-Assad’s billionaire cousin Rami Makhlouf, and a crisis in the Lebanese banking system, in which many Syrian individuals and companies hold accounts.

The SANA article gave little detail of any substantive measures for “maintaining strict control over the currency market and exchange firms”. The Assad regime has already threatened long prison sentences for black market trading and transfer of large amounts of money out of the country.

The only announced step appeared to be a measure to limit black market exchanges, by allowing Syrian citizens to move money between bank accounts in different provinces.

Central Bank Governor Hazzem Karfoul said that “all sides involved in economic activity, both public and private, must cooperate to control and stabilize the exchange rate”.

The currency fall has fed already-high inflation, spurred by shortages of food, fuel, and basic items. With a 75% contraction in GDP since the Syrian uprising of March 2011, the regime has shown little sign of reconstruction despite Russian-enabled reoccupation of most of Syria.

The crisis is likely to be compounded this week with the introduction of new US sanctions, under the Caesar Act, over the regime’s crimes against humanity.

The European Union renewed its sanctions over the regime’s “violent repression” on May 28.