Marches Across US After No Charges in Breonna Taylor Killing 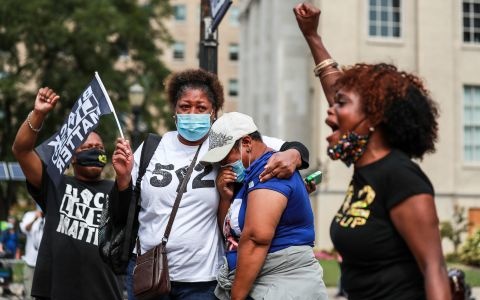 Protesters have marched across the US after no charges were brought against three police officers over the killing of Breonna Taylor in Louisville, Kentucky in March.

A grand jury charged a former detective with reckless endangerment over his shots that reached another apartment, but there were no counts against the two officers who shot Taylor, an emergency room technician, six times at close range.

Protesters marched on Louisville streets after the announcement. There were demonstrations in New York, Chicago, Milwaukee, and others.

Marchers called for all three officers to be held accountable. The policemen fired a total of 32 shots after they stormed her apartment with a warrant, looking for Taylor’s ex-boyfriend who is wanted on drug charges.

Prosecutors said the two officers who shot Taylor were justified because they had identified themselves and had then come under fire from her current partner, Kenneth Walker, who thought intruders were forcing their way into the apartment. One officer was shot in the leg.

Only one neighbor, out of nearly a dozen interviewed by The New York Times, reported hearing the officers shouted “police” before entering. The FBI has opened an investigation into whether the inclusion of Taylor’s name and address on the warrant for her ex-boyfriend violated her civil rights.

In Louisville, hundreds of people gathered for the reading of the grand jury’s decision. They exclaimed, “That’s it?”, as it became clear that there would be no charges over the killing.

The marchers, many crying. chanted, “Say her name! Breonna Taylor” and “No Justice, No Peace”. They held signs such as “Black Lives Matters” and “Abolish Police”. Dozens of cars followed, honking their horns.

Police followed for more than two hours in cruisers. Then a line of officers in riot gear confronted the marchers, released chemical agents, and arrested 46 people.

Two officers were shot on Wednesday night, suffering non-life threatening injuries. It is unclear who fired on them or if there is any connection to the marches.

Police Chief Robert Schroeder said a suspect is in custody.

Even amidst the profound grief & anger today's decision generated, violence is never & can never be the answer. Those who engage in it must be held accountable. Jill & I are keeping the officers shot tonight in Louisville in our prayers. We wish them both a swift & full recovery.

There have been more than 100 days of protests in Louisville following the killing of George Floyd by a police officer in Minneapolis in late May.

Brett Hankison, the detective charged with reckless endangerment, has been dismissed. However, the two officers who killed Taylor remain on the police force.

Taylor’s mother Tamika Palmer, who sued the city of Louisville for wrongful death in April, received a $12 million settlement last week. She only learned of the grand jury’s decision minutes before it was announced by the Kentucky Attorney General.

In New York City, protesters marched from Brooklyn to Lower Manhattan, shouting, “Wake up, this is your fight too!”

Demonstrators blocked roads in Milwaukee, Wisconsin. In Buffalo, New York, a truck drove through a group of marchers, and a car drove through protesters in Denver, Colorado.

In response to acts of violence & vandalism, the protest in front of the SDPD Headquarters building (1401 Broadway) has now been declared an unlawful assembly.

Demonstrators are ordered to immediately disperse. If you do not do so you may be arrested. pic.twitter.com/coUlOTVZ6p