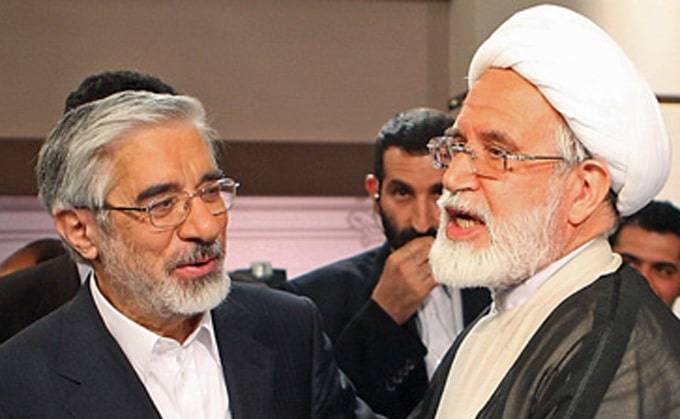 Hopes have been raised for the freeing of Iran’s opposition leader Mehdi Karroubi, after 9 1/2 years under house arrest to check protests against the regime.

For the second time in a month, Iranian media have published a photo of Mehdi Karroubi, a former Parliament Speaker and candidate in the disputed 2009 Presidential election, meeting with political activists.

Saham News, the site of the Green Movement that was created amid the mass protests in 2009, hinted that authorities may lift the house arrest. It was imposed in February 2011 on Karroubi, fellow 2009 candidate and former President Mir Hossein Mousavi, and Mousavi’s wife, activist, artist, and academic Zahra Rahnavard.

There is no sign of an easing of restrictions on Mousavi, the leading challenger in 2009 before the regime announced that President Mahmoud Ahmadinejad had “won”, or on Rahnavard.

Saham said Karroubi told reformist activists that his main concerns are essential reforms and the social and economic situation of Iranians: “He also spoke about historic events to explain current developments in Iran in addition to local threats and problems.”

Visitors to Karroubi included reformist politician Gholamhossein Karbaschi and the editor-in-chief of a reformist newspaper. Earlier this month, he met members of the Etemad-e Melli Party.

After the meeting, Etemad-e Melli member said Karroubi had emphasized that next year’s Presidential elections must be held with “great splendor” and enthusiastic participation.

But Karroubi issued a statement refuting Dousti’s account as “his own interpretation”. The Green Movement leader said his positions will only be expressed in writing or through family members.

Despite the strict house arrest, Karroubi has periodically issued statements challenging the Supreme Leader and the Government, including over the regime’s repression of mass protests.