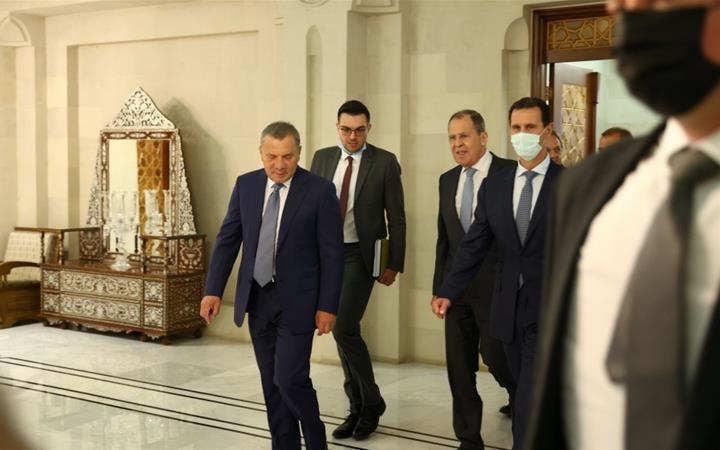 He proclaimed that he wanted to expand business ties and investment: “The government was determined to continue to work with Russian allies to implement signed agreements and to ensure the success of Russian investments in Syria.”

But Moscow has been wary of putting more into Assad’s leadership without a foreseeable return. Through the spring and summer, Russian officials have been wary of the lack of political progress because of the Assad regime’s intransigence over a Constitutional Committee. Articles in State outlets have chided widespread corruption. Statements have tipped off concern that Russia is not getting economic returns from its essential support which prevented Assad losing power in 2015.

Russia has also led the criticism of toughened US sanctions, imposed in June under the “Caesar Act” over the Assad regime’s war crimes and killing of tens of thousands of detainees.

In remarks on Monday, Borisov stuck to the public line of Russian support for the regime, saying Moscow presented proposals in July for economic links and expected an agreement in December on his next visit to Damascus.

The two sides had said they would review energy, mining, and power projects, with Russia and Iran vying to get control of Syrian resources.

No details were given yesterday, but Borisov said that Russia and the regime are working to restore around 40 energy facilities in Syria, including offshore oilfields.

Lavrov avoided any position on Assad’s future but, for the moment, protected him over the failure to advance in political talks over a new Constitution.

“The issue of elections in Syria is a matter of the Syrian government. And until a new constitution is elaborated or the existing one is amended, the current constitution remains in force as it is,” he told a press conference.

In the absence of detailed information from the meetings, a US-based Syrian banker, who has advised the Assad regime, laid out the regime’s approach on social media on Monday.

He reviewed the combination of damaging regime measures, the effect of the 114-month conflict, a banking crisis in Lebanon where many Syrians hold accounts, and Coronavirus — all as the Syrian currency has plunged from less than 600:1 v. the US currency last autumn to more than 2,000:1 this summer.

The banker maintained, “No amount of sanctions will push Assad to surrender power”:

Rather than leaving, the more Assad is pushed, the more he will pivot to Russia or any other capital that is willing to help. During his last two speeches, he is already preparing Syria’s citizens for more economic hardship ahead. The populace has zero option but to endure it.

He cited the regime’s subsidies on essentials such as sugar, rice, and fuel, but acknowledged that it is becoming difficult to import some items and that subsidies are being reduced.

See Hunger in Syria as Assad Regime Struggles with Imports