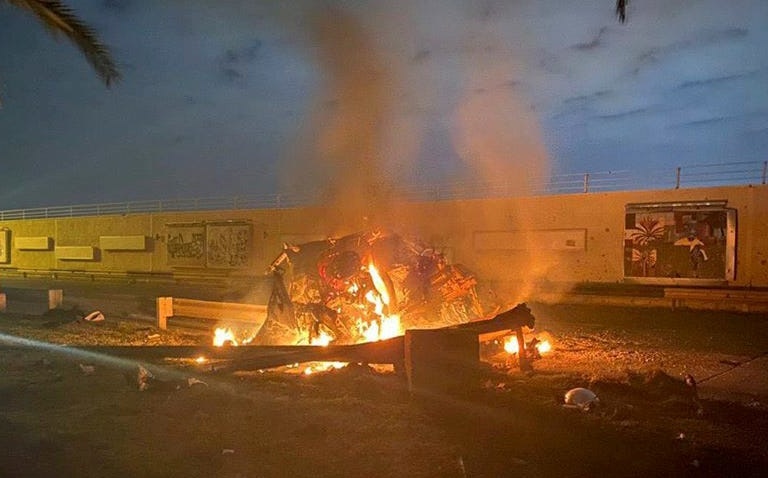 Burning debris from the US drone strike on the convoy of Iranian Gen. Qassem Soleimani, near Baghdad International Airport, Iraq, January 3, 2020

A US drone strike killed Soleimani, the head of the Revolutionary Guards’ Quds Force, and nine other people outside Baghdad International Airport on January 3.

The assassination followed a series of attacks by Kata’ib Hezbollah on Iraqi bases which killed and wounded US troops and contractors. The Trump Administration proclaimed Soleimani as the architect of Iran-supported “terrorism” throughout the Middle East.

The Quds Force is the Revolutionary Guards branch for operations outside Iran, including intervention in Iraq, in support of Syria’s Assad regime, and alongside Lebanon’s Hezbollah.

See EA on Monocle 24 and BBC: A US-Iran Showdown After Assassination of Gen. Soleimani?

“Action Taken by US Was Unlawful”

Agnes Callamard, the UN Special Rapporteur on extrajudicial, summary, or arbitrary executions issued a report on drone warfare, including targeted killings on Monday.

She assessed that the US failed to provide sufficient evidence of an ongoing or imminent attack against its personnel and interests.

Major General Soleimani was in charge of Iran military strategy, and actions, in Syria and Iraq. But absent an actual imminent threat to life, the course of action taken by the US was unlawful.

Callamard said, “By killing General Soleimani on Iraqi soil without first obtaining Iraq’s consent, the US violated the territorial integrity of Iraq.” She summarized:

The targeted killing of General Soleimani, coming in the wake of 20 years of distortions of international law, and repeated massive violations of humanitarian law , is not just a slippery slope. It is a cliff.

The Special Rapporteur called for regulation of drones, “The world is at a critical time, and possible tipping point, when it comes to the use of drones….The Security Council is missing in action; the international community, willingly or not, stands largely silent.”

Callamard will present her findings to the Human Rights Council on Thursday. The Trump Administration left the body in 2018.

Iran responded to the assassination with rockets on an Iraqi airbase, injuring more than 34 US personnel from the concussive blast, including 34 with “traumatic brain injury”.