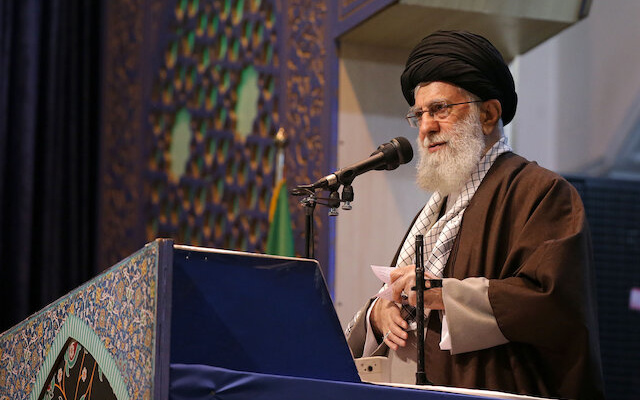 Was Iran’s Supreme Leader involved in the cover-up of the military’s shootdown of a Ukraine passenger jet on January 8, killing 176 passengers and crew?

An Iranian air defense position outside Tehran fired two missiles at Ukraine International Airlines Flight 752 about 6:30 am, soon after the Boeing 737 jet took air from Imam Khomeini International Airport. The position was on high alert for a US military strike: hours earlier, Iran fired missiles at two Iraqi bases with US personnel, carrying out Ayatollah Khamenei’s promise of a “slap in the face” for the US assassination of Maj. Gen. Qassem Soleimani on January 3.

Shrapnel from the exploding missiles tore through the aircraft, quickly downing it. More than 100 Iranians were among the victims.

The Iranian military lied about the crash, saying the cause was catastrophic engine failure. It did not inform the Rouhani Government for two days about the circumstances, leading a spokesman to declare that reports of a shootdown — in Western media with information from intelligence services — was a “lie” for “psychological warfare” to unsettle the regime.

Under international pressure, the military and Government finally admitted the downing on Saturday. There were immediate protests for four days across Iranian cities.

The Supreme Leader had made only a brief comment on the episode, saying on January 17, “The plane crash was a bitter accident that truly broke our hearts.” His emphasis has been on blame of the US — “enemies were happy about [the crash]” — and the Iranian strikes on the Iraqi bases, which injured 34 US troops.

The issue of the Supreme Leader’s involvement has been elevated by an in-depth report by Farnaz Fassihi, in Sunday’s New York Times, on the cover-up. The article draws upon interviews with Iranian diplomats, current and former government officials, ranking members of the Revolutionary Guards, and people close to the Supreme Leader’s inner circle”.

Fassihi writes that, on the evening of the shootdown, “Ayatollah Khamenei was informed.” But these are the only four words about his role until he intervened on Saturday, between the military and President Hassan Rouhani, to order the release of a statement acknowledging the missile fire.

“Khamenei Was Informed” — But Then?

Fassihi reinforces and adds to the story of the military’s deception of the Government as well as the international community.

The officer in command of the air defense post did not know that a warning of a US cruise missile was a false alarm. Spotting a jet overhead, he sought permission to fire but received no answer. So he fired two missiles.

Revolutionary Guards and Iranian military commanders immediately knew of the possibly mistake, and created a secret investigative committee. By Wednesday night, they concluded “that the plane crashed because of human errors”.

Commanders decided to keep the conclusion secret until the plane’s data and voice recorders were examined and formal aviation investigations completed, a process could take months.

They were motivated by the hope that domestic and international criticism would have dissipated when the truth was finally revealed. This would avoid a recurrence of mass protests in November, sparked by the Government’s sudden announcement of a sharp rise in petrol prices.

“They advocated covering it up because they thought the country couldn’t handle more crisis,” said a “ranking member of the Guards”. “At the end, safeguarding the Islamic Republic is our ultimate goal, at any cost.”

On Wednesday night, the Supreme Leader was told of the secret findings.

Debate Over An Admission

Government spokesman Ali Rabaei later said, “The government made back-to-back phone calls and contacted the armed forces asking what happened, and the answer to all the questions was that no missile had been fired.”

Rabaei told reporters that the Western media’s reports on the shootdown were “a big lie”, only for top commanders to tell President Rouhani the truth in a meeting hours later.

Angered, Rouhani demanded an immediate announcement but the commanders said the fallout could destabilize the country.

When the President threatened to resign, “a member of Ayatollah Khamenei’s inner circle who was in the meeting” told the Supreme Leader. Khamenei sent a message that the Government should prepare a public statement which acknowledged the downing.

On Saturday morning at 7 am, the military issued its statement about “human error”. Rouhani’s statement followed, including the promise of an investigation.

But, with Ayatollah Khamenei making no substantive comment, the question remains:

Did he order or endorse the cover-up between January 8 and January 10, until President Rouhani forced his hand? Or was the Supreme Leader a bystander as Iran’s military effectively led the regime response to its deadly mistake?