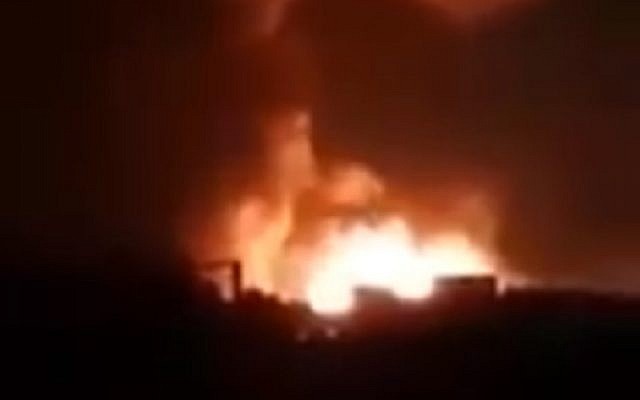 Betraying its concern, Iran’s military has shaken its fist at Israeli airstrikes that have killed Iranian forces and damaged Tehran’s position in Syria.

Spokesperson Brig. Gen. Abolfazl Shekarchi said on Thursday, “We warn the Zionist liars and their puppeteers that if they continue their mischief, they will see the upper hand of the Islamic Republic of Iran and the resistance front in action.”

Israel has regularly struck Assad regime, Iranian, and Hezbollah positions throughout Syria’s 112-month conflict. Tel Aviv has escalated the attacks since April, seeking the withdrawal of Iranian forces and Iran-backed foreign militia from the country.

Iranian bases throughout Syria have been attacked, with casualties among Iranian and Assad regime personnel. Key facilities in the regime’s conventional and chemical weapons programmes have been damaged.

One attack last month came hours after a visit by the commander of the Revolutionary Guards’ Quds Force, which is responsible for operations in Syria. Maj. Gen. Esmail Qa’ani, who assumed command in January after the US assassination of Maj. Gen. Qassem Soleimani, had left the Iranian base near the Iraq border; however, the strike killed six personnel and embarrassed Tehran’s military.

Israel is also suspected of responsibility in the bombing of Iran’s main nuclear complex at Natanz last month, which destroyed a building where uranium centrifuges were balanced.

There have been a series of explosions at military bases and power plants inside Iran in recent weeks. Iran’s military has claimed causes such as accidental detonations of gas tanks.

Brig. Gen. Shekarchi made up the story that Israel has claimed “hundreds and thousands” of Iranian casualties to dismiss damage from the airstrikes as a “desperate media war, psychological operation, and manufacturing lies” by “the Zionist-Western media empire and its regional affiliates”.

Shekarchi said there had been “the martyrdom of no more than eight Iranians” and then issued his own declaration of mass killing. He said “a large number” of Israelis were slain in the firing of missiles by the “Resistance Front” on the Israeli-occupied Golan Heights.

Since 2018, only a few rockets have been fired by the Assad regime into the Golan Heights, with no reports of Israeli casualties.

Shekarchi’s declaration came days after the revelation of CIA cyber-attacks on Iran since 2018, seeking to damage infrastructure and to disrupt the activities of media organizations, charities, religious institutions, and businesses linked to intelligence services.