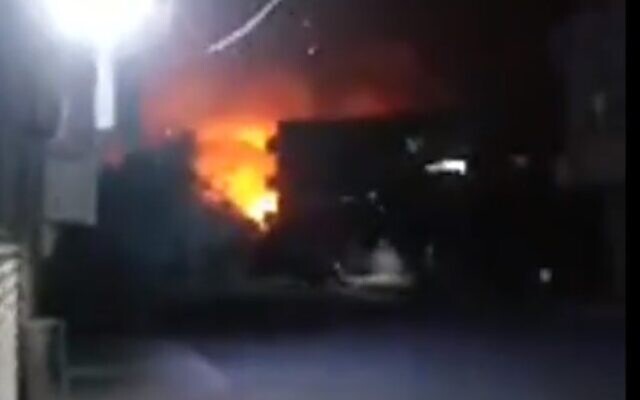 Local sources claim that warplanes have hit Iranian positions in eastern Syria for the second time in 24 hours, killing another nine people.

The bombing is believed to be by Israel, which has stepped up a campaign of attacks on Assad regime, Iranian, and Hezbollah targets throughout Syria this spring.

Sunday’s strike was near al-Bukamal close to the Iraq border, also the site of Saturday’s bombing.

The Saturday attack killed six people, four of them Syrian nationals. It came hours after a visit to a base by Maj. Gen. Esmail Qa’ani, the head of Iran’s Quds Force.

The Quds Force is the Revolutionary Guards branch responsible for operations outside Iran. It was the first visit to Syria by Qa’ani, who took charge after Maj. Gen. Qassem Soleimani was assassinated by a US drone strike on January 3.

The Israel Defense Forces, following standard practice, have not commented on the weekend’s events.

Nor has the Assad regime, although “political and military expert” Alaa al-Asfari acknowledged Saturday’s strikes in an interview with Russia’s Sputnik Arabic Radio.

Asfari claimed, “The visit of the Iranian Quds Force Commander to Syria is an expression of Iran’s support for Syria in its war against the ISIS terrorist organization, which broke its back in the Syrian territories, despite the support of America and Israel.”

The US-supported, Kurdish-led Syrian Democratic Forces removed the Islamic State from its last village in eastern Syria in March 2019, after a 3 1/2-year campaign.

The Assad regime, which has sworn to “regain every inch” of Syria, and Turkey are each opposed to Kurdish autonomy in northeast Syria.

Throughout Syria’s 111-month conflict, Israel has regularly attacked pro-Assad targets. The strikes initially focused on stopping the movement of weapons, and preventing an Iranian or Hezbollah province near the Israeli-occupied Golan Heights. However, since 2017 they have expanded to support Prime Minister Benjamin Netanyahu’s demand for Iran’s full military withdrawal from Syria.

Since mid-April, Israel has carried out at least ten strikes on pro-Assad targets, including Iranian bases and the Scientific Studies Research Center, a key part of the regime’s conventional and chemical weapons program.