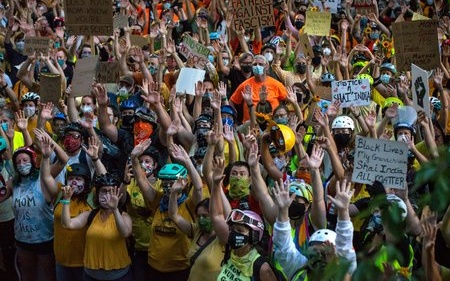 Lagging behind Democratic nominee Joe Biden in the polls, Donald Trump has dispatched Homeland Security officers to Portland, Oregon, where they have beaten and detained Black Lives Matter marchers — and threatened to send federal forces into other cities.

Speaking with Turkey’s TRT World and London’s Monocle 24, I explain Trump’s motive and assess whether his attempt to seize, and arguably abuse, extraordinary power will succeed.

Donald Trump is trying to create a Reichstag Fire moment.

But Portland is not a Reichstag Fire. And the man in Germany stoked confrontation more effectively in the 1930s for his political future than Donald Trump will for his.

If this is not a new playbook about “enemies”, it is a new chapter because of the extent to which Donald Trump has said that he does not recognize any check on his authority.

This is not an attempt to work through courts or Congress, but to bypass every institution with the false portrayal of protests dominated by violence and by extremists and anarchists.