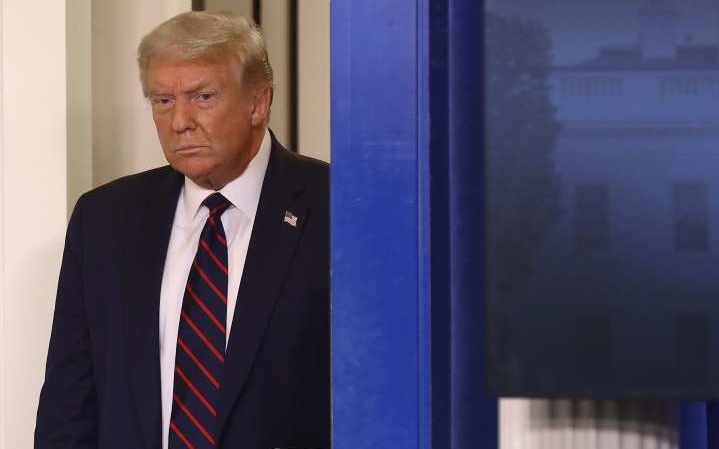 Government medical experts, including Dr. Anthony Fauci, are shut out as Donald Trump resumes daily briefings over the Coronavirus pandemic.

Trump largely stuck to a new script on Tuesday, replacing his denial of the virus’s threat with the prepared statement, “It will probably get worse, unfortunately, before it gets better.” But he soon strayed from the text and reverted to his insistence that “it will disappear”.

Nevada, Oregon, and Tennessee reported record daily death tolls. The seven-day US average is 810, up from 475 in early July.

Fauci, the White House’s top Coronavirus expert, said before Trump’s appearance, “I was not invited up to this point. I’m assuming I’m not going to be there.”

Dr. Anthony Fauci says he was not invited to the White House coronavirus briefing today and says the last time he spoke to President Trump was last week https://t.co/b3a787uR2n pic.twitter.com/8uUO72cYKP

Trump and his inner circle have been waging a campaign to discredit Fauci, upset that the doctor’s assessments on the extent of the virus were hindering Trump’s demand to “reopen” the US as he pursues re-election.

The White House has barred Fauci from prominent US TV interviews. However, the doctor has used Congressional testimony, webcasts and podcasts, and interviews with foreign outlets to explain that the US is not only “still in a first wave” of Coronavirus but facing increased danger and a “very distressing” death toll.

Trump has responded by proclaiming the doctor “wrong” and “a bit alarmist”. With Trump’s encouragement, senior advisor Peter Navarro published an editorial last week, “He has been wrong about everything I have interacted with him on.”

Fauci told CNN yesterday that he is still the director of the National Institute of Allergy and Infectious Diseases, and that last week he had his first conversation with Trump since early June.

He continued his pushback against Trump’s inner circle, saying that the safety of children and staff must guide the policy on school reopenings from next month.

Trump has demanded full in-class instruction. He has threatened to cut funding for any State or school providing online teaching, and the White House has quashed Centers for Disease Control guidelines on school safety.

The CDC raised further concern on Tuesday about reopening, with a report that the number of people infected with Coronavirus is 2 to 13 times higher than reported rates in different parts of the US.

Dr. Fiona Havers, the researcher who led the study, wrote in an e-mail, “Many of these people likely had no symptoms or mild illness and may have had no idea that they were infected.”

The study considered people who had routine clinical tests, or were inpatients at hospitals, in 10 cities and states.

Straying from a New Script

Trump halted the daily briefings in late May after, in the presence of White House Coronavirus Task Force coordinator Dr. Deborah Birx, he recommended the ingestion of disinfectant and ultraviolet treatment as cures for the virus.

Birx was also absent from Tuesday’s briefing. Trump said she was “right outside” but gave no explanation for her exclusion from the room.

Trump’s script included a sharp departure from his refusal to wear masks, despite medical and public health guidance that it is one of the most effective steps in containing the virus. He has said those wearing masks are making a public statement against him.

But Trump is facing electoral damage over his defiance, with approval of his handling of the crisis falling from 51% in late March to 38% last week.

So he put put a picture of himself in a mask on Twitter on Monday morning. In the briefing, he read, “Get a mask. Whether you like the mask or not, they have an impact. They will have an effect and we need everything we can get.”

Asked about his sudden declaration that mask-wearing is “patriotic”, Trump did not explain why he refused for weeks to wear one in public.

And he reverted to type on other points. He repeated his lie that the US has a lower fatality rate than “almost everywhere else in the world”. (Medical databases put the US from 7th to 10th highest in the world for deaths per 100,000 people.)

Trump insisted that “no governor needs anything right now”, defying the warnings of State leaders of shortages as they face a surging virus.

Gov. Kate Brown of Oregon explained on Tuesday that “we need help with testing supplies and equipment”. Gov. Larry Hogan of Maryland warned of testing shortages.