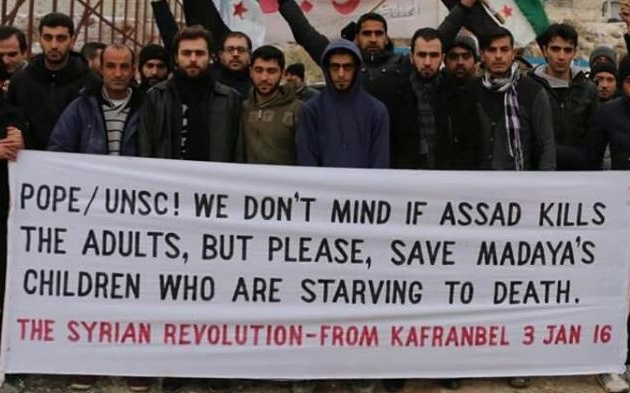 An appeal to the UN from residents of Kafr Nabl in northwest Syria, January 2016

The UN is warning that Syrian civilians will face either mass starvation or mass exodus without more aid.

The head of the UN World Food Programme, David Beasley, said on Tuesday that a million Syrians are “severely food insecure”.

The whole world’s facing crisis unlike anything we’ve seen probably in everyone’s lifetime. But, quite frankly, what’s happening in Syria is unprecedented. It’s the worst of all storms coming together….

We’ve got people on the brink of starvation now, and they can’t wait. People will die, and people are dying as we speak.

A two-day international donor conference began in Brussels yesterday. The UN and its partners are appealed for $3.8 billion for humanitarian work inside Syria and $6.04 billion to help countries hosting Syrian refugees. The appeals are currently funded at 30% and 19% respectively.

Hundreds of thousands of civilians have been killed in Syria’s 111-month conflict, and more than 13 million — over half the population in March 2011, at the beginning of the uprising — have been displaced from their homes. There are about 6.6 million refugees, most in Turkey, Lebanon, and Jordan.

The problem is compounded by the Assad regime’s sieges, including on the Rukban camp in southeast Syria, and Russia’s blocking of international assistance.

In January, Moscow and China used Security Council vetoes to close crossings from Iraq and to shut down all but two from Turkey.

Regime-held areas are suffering from shortages of food, fuel, electricity, and basic goods. There is rampant inflation, and the Syrian currency has lost about 85% of its value since last autumn.

The crisis is likely to be compounded with this month’s introduction of new US sanctions, under the Caesar Act, over the regime’s crimes against humanity.