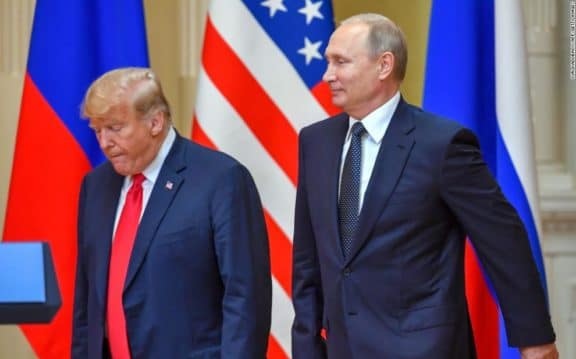 US officials gave a written briefing to Donald Trump in late February, summarizing their conclusion that Russia was paying bounties to Taliban insurgents to kill US and coalition troops in Afghanistan.

“Multiple officials familiar with the matter” said part of the bounty investigation was of an April 2019 car bombing that killed three Marines.

See also EA on Australia’s ABC: Trump, Russia, and the Bounty on US Troops in Afghanistan

The latest revelation undermined the defense by Trump and his inner circle that he was not briefed about the US intelligence.

Two officials that the intelligence was included months ago in the President’s Daily Brief. Both gave a date of late February, one citing February 27.

A month later, a high-level White House meeting considered action ranging from diplomatic protest to sanctions, but no response was authorized.

The intelligence continued to circulate, including in a May 4 article in the CIA’s World Intelligence Review.

ORIGINAL ENTRY: US intelligence told the Trump Administration for months that Russia was paying Afghanistan’s Taliban to kill US troops — but Donald Trump took no action.

US intelligence officers and Special Operations forces in Afghanistan first alerted superiors in January to the suspected Russian plot, carried out by a unit of Moscow’s military intelligence service GRU. Officials said the deaths of “several US service members” were attributed to the bounties.

The investigation was triggered by the recovery of large amount of US money from a raid on a Taliban outpost that prompted suspicions. Interrogations of captured insurgents and criminals built up the assessment of Russian involvement.

By March, the Administration had been notified of the intelligence. It was included in the daily brief for Trump.

A high-level White House meeting in late March led to discussions of possible responses to the Russian action, ranging from diplomatic expressions of disapproval and warnings to sanctions. The US Special Envoy for Afghanistan, Zalmay Khalilzad, advised direct confrontation of the Russians, but some National Security Council officials overseeing Russian affairs were opposed.

No action was taken. Instead, Trump said on May 8 of Russian President Vladimir Putin:

US intelligence concluded that the GRU’s Unit 29155 pursued the bounty program throughout 2019.

According to Western intelligence and independent analysts, Unit 29155 was created in 2008. Since 2014, its activities have been stepped up as part of a program to destabilize Western governments. Operations included an attempted assassination of a Bulgarian arms dealer in April 2015, the nerve agent attack on former GRU Col. Sergey Skripal in Salisbury, England in March 2018, a destabilization campaign in Moldova, and a failed coup plot in Montenegro in 2016.

Two officials said the information about Russia’s plot was “well known” among the intelligence community in Afghanistan, including the CIA’s chief of station and military commandos pursuing the Taliban.

Ten US troops were killed by hostile forces in 2018, 16 in 2019, and two so far this year. Several service members have been slain each year by members of Afghan security forces, with suspected infiltration by the Taliban.

The assessment was sent up the chain of command to senior military and intelligence officials, reaching the highest levels of the White House in March. A former US official said National Security Advisor Robert O’Brien, and White House Chief of Staff Mark Meadows, would be involved in any decision to brief Trump. CIA Director Gina Haspel might have also contributed.

The US is currently negotiating with the Taliban over a path to a political resolution of the Afghan conflict, more than 18 1/2 years after the group was forced out of power in Kabul in November 2001.

Last week the Afghan Government and Taliban said they will meet in Qatar. A date will be announced after certain conditions are met, including the completion of a release of 5,000 Taliban detainees.

Russia has at times cooperated with the US over the process. However, a “former senior Trump White House official” said that Moscow has at times sought to damage US interests.

He added that Moscow is looking for revenge after US airstrikes killed hundreds of Assad regime fighters and Russian mercenaries advancing on an oil field in northeast Syria.

See 200 Russians Killed by US Airstrikes in Syria? Maybe Not.

“They are keeping a score sheet, and they want to punish us for that incident,” the official said.

Trump and the White House issued a series of muddled denials on Sunday.

Nobody briefed or told me, @VP Pence, or Chief of Staff @MarkMeadows about the so-called attacks on our troops in Afghanistan by Russians, as reported through an “anonymous source” by the Fake News @nytimes. Everybody is denying it & there have not been many attacks on us…..

He proclaimed, in defiance of his support of Putin and his past blocking of US sanctions on Moscow, “Nobody’s been tougher on Russia than the Trump Administration.”

Director of National Intelligence John Ratcliffe and his predecessor Richard Grenell, both staunch Trump political allies, also claimed that Trump had not been told of the intelligence.

But those assertions portrayed a President who was ignorant of a serious matter involving a foreign power and the killing of US troops.

Sen. Lindsey Graham, a Trump friend and normally a firm backer, tweeted, “Imperative Congress get to the bottom of recent media reports that Russian GRU units in Afghanistan have offered to pay the Taliban to kill American soldiers with the goal of pushing America out of the region.”

Republican Rep. Adam Kinzinger wrote, “Russia is not a partner, and not to be negotiated with. Donald Trump needs to immediately expose and handle this, and stop Russia’s shadow war.” Rep. Liz Cheney, the third-highest GOP member of the House, tweeted:

If reporting about Russian bounties on US forces is true, the White House must explain:
1. Why weren’t the president or vice president briefed? Was the info in the PDB?
2. Who did know and when?
3. What has been done in response to protect our forces & hold Putin accountable?

The United States needs to prioritize defense resources, maintain a sufficient regional military presence and continue to impose serious consequences on those who threaten us and our allies — like our strikes in Syria and Afghanistan against ISIS, the Taliban and Russian mercenary forces that threatened our partners.

So on Sunday night, Trump shifted his denial, claiming — without any supporting evidence — that US intelligence was dismissing its own assessment.

Intel just reported to me that they did not find this info credible, and therefore did not report it to me or @VP. Possibly another fabricated Russia Hoax, maybe by the Fake News @nytimesbooks, wanting to make Republicans look bad!!! https://t.co/cowOmP7T1S

An unnamed “senior Administration official” propped up Trump with the claim that Trump was not briefed because the intelligence agencies had not reached a consensus.

However, another official said there was broad agreement that the assessment was accurate, although there was discussion of confidence in individual items of evidence from interrogations and surveillance.