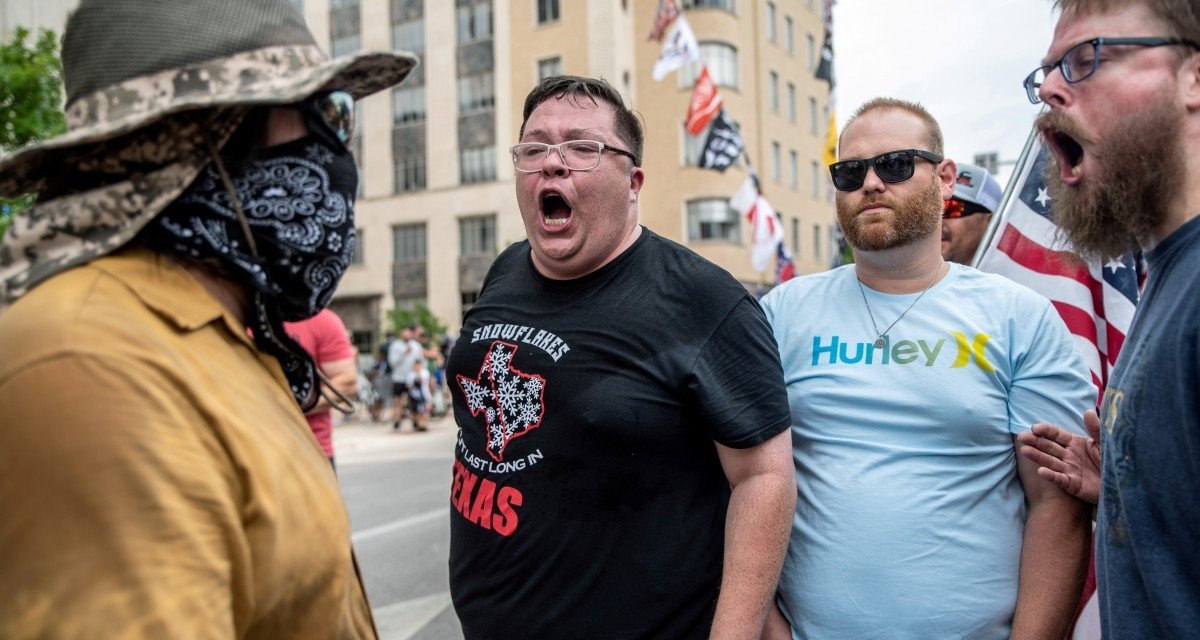 Men in Austin, Texas shout at a person wearing a mask to contain Coronavirus (Reuters)

Republican Governors pull back their support of Donald Trump’s “reopening” of the US, as Coronavirus cases continue to surge in most of the country.

Coronavirus rates are increasing in 35 of 50 states.

In Arizona (85% rise in 14 days), Gov. Doug Ducey — who had refused throughout last week to pause reopening — reversed his position on Monday. He halted gatherings in bars, gyms, movie theaters, and water parks for 30 days, banned public events for 50 or more people, and moved back the return to schools to August 17.

Ducey told Arizonans to “mask up”, but balked at issuing a statewide order or reissuing stay-at-home measures. He is still allowing individual jurisdictions to stage events with large crowds, if they implement social distancing measures, and there is no guidance on activities such as youth sports.

“We want to provide some flexibility,” Ducey said. “Personal responsibility and responsible behavior can go a long way.”

In Florida (227% rise), the city of Jacksonville issued a mask requirement in any indoor public place where social distancing is not possible.

That poses a challenge for the Trump camp, which moved August’s Republican National Convention to Jacksonville. The event was scheduled for Charlotte, North Carolina, but Gov. Roy Cooper refused to lift social distancing measures.

Other FLorida cities and counties are rolling back the reopening of beaches, bars, restaurants, and other social activities. South Florida counties closed beaches for the July 4 holiday weekend.

In Tennessee (58% rise), Gov. Bill Lee of Tennessee extended an emergency order and some measures until August 29, as the state announced a record daily increase in Monday.

Gov. Brian Kemp of Georgia (131% increase), the first state leader to follow Trump’s reopening command, is expected remaining restrictions. The measure were due to expire on Wednesday.

In Kansas (157% rise), Gov. Laura Kelly said she will sign an executive order requiring most residents to wear masks in public from July 3.

This is a simple, proactive step we can take to keep Kansans at work, get our kids back to school, and keep ourselves and our neighbors healthy. Wearing a mask is not only safe — but it is necessary to avoid another shut down.

Gov. Greg Abbott of Texas (139% rise) foreshadowed the rollback last week when he paused reopening and reimposed some limits on bars and restaurants.

Even states who have contained the outbreak are pausing the easing of restrictions. New Jersey Phil Murphy said the resumption of indoor dining in restaurants, scheduled for Thursday, will be postponed “indefinitely”. Gov. Andrew Cuomo of New York said a decision will be made on Wednesday over restaurants.

A top official at the Centers for Disease Control and Prevention warned that the surge will be hard to bring under control.

I think there was a lot of wishful thinking around the country that, ‘Hey, summer, everything is going to be fine, we’re over this. And we are not even beginning to be over this….

What I think is very discouraging is we clearly are not at a point where there’s so little virus being spread that it’s going to be easy to snuff out.

The assessment was an effective rebuff to White House Press Secretary Kayleigh McEnany, who said earlier on Monday, “We’re aware that there are embers that need to be put out.”

Schuchat took apart Donald Trump’s declaration that summer heat will kill off the virus: “In terms of the weather or the season helping us, I don’t think we can count on that.”